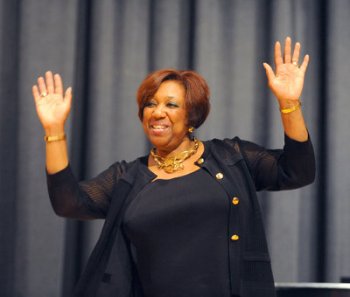 There are few organizations more corrupt than the School District of Philadelphia. For the most part, the city’s public schools are an unmitigated disaster where mice roam the hallways, terrible teachers are protected by the unions, and kids commit crimes on a daily basis.

Sadly, the uber-liberal leadership is even worse; pissing away funds for pet projects, and denying work to white-owned companies.

Yeah, you read that correctly.

Security and Data Technologies, Inc. (SDT) was initially chosen by Philadelphia School District (PSD) and then-Superintendent Arlene Ackerman back in 2010 to install surveillance cameras at 19 schools PSD classified as particularly dangerous. After the company began preliminary work, it was abruptly “deselected” and the $7.5 million no-bid contract was then awarded on an emergency basis to IBS Communications, a company not eligible for no-bid contracts.

Hmm, I wonder why Ackerman- may she rot in Hell – became an American-Indian-giver?

The abrupt turn of events, it turns out, had a racial motivation. An investigation by The Philadelphia Inquirer discovered Ackerman became fed up that the district kept giving contracts to white-owned companies. PSD is owned by two white men.

So, after telling other PSD administrators she would make sure “all these white boys didn’t get contracts,” Ackerman canceled SDT’s contract and diverted it over to IBS, which had black ownership.

The PSD gave IBS the contract on the QT before screwing SDT and earning some legal STD’s PDQ.

After Ackerman’s stunt was publicized, SDT sued, and the six-year legal odyssey finally ended Monday with a victory for the plaintiffs. A jury ruled that the district, along with Ackerman’s estate (she died in 2013), must pay out $2.3 million in damages. The damages cover $2.1 million in lost profits along with a small sum of compensatory damages. (H/T – Jim)

First, that is hella-awesome, and I’m pretty sure this news gave me an erection. It’s either that, or I took two Viagra instead of Tylenol this morning. Second, please don’t kid yourself; there is just as much reverse racism in Philadelphia’s schools as there is in other places. Unfortunately, it takes a multi-million dollar lawsuit for it to make headlines. Finally, this is why I gladly pay close to $8,000 annually to send my kids to Catholic school.

7 thoughts on “In Philly, White Is The New Black”