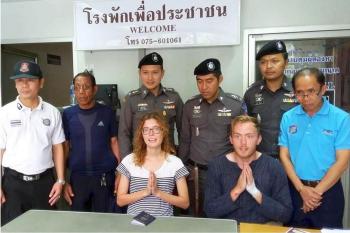 An Irish man and an American woman literally prayed for forgiveness after being caught kneeling at the altar in Thailand.

An Irish tourist caught enjoying oral sex in public while on holidays has been fined €50 after handing himself into local cops.

A video of the chap having his todger tended to by a bikini-clad American lass went viral this month after the couple were caught red-handed by furious locals. The mucky movie begins with a woman shouting “hello, hello” after spotting the pair. A man calls out: “What are you doing here, why you f***ing outside here?”

After apologizing to authorities on Phi Phi Island the couple sucked up their punishment — accepting a fine of 2000 baht for acting inappropriately in public.

Wait a minute, Thailand – the sex capital of the free world and host to hoors and ladyboys – was outraged over two skinny white people testing their gag reflex? What year is this?

By the way, the Irish man also apologized and paid a $50 fine to the American woman for his tiny penis.