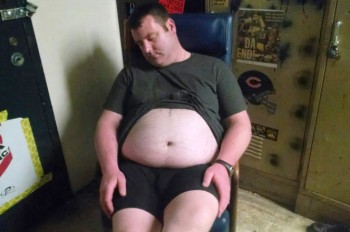 A New York City police officer has been suspended after showing up for work with a sopped liver.

A Bronx cop was stripped of his gun and badge amid allegations that he was drunk on the job — and a photo emerged of him passed out in the stationhouse locker room with his beer belly exposed.

Officer Richard Evans was deemed “unfit for duty” during his midnight-to-8 a.m. shift in the 52nd Precinct in Norwood.

Someone at the scene also shot video of the allegedly drunken cop and made a complaint to 311. A sergeant responded, declared Evans fit for duty, and the cops all left without making any arrests.

Evans stayed in the field until a short time later, when a duty captain summoned him back to the precinct stationhouse. The captain interviewed Evans, declared him unfit for duty and immediately suspended him.

I assume the sergeant’s ineptitude will be explained away by claiming Officer Evans drank an entire gallon of vodka in the half hour between the sergeant’s evaluation and the captain’s.

5 thoughts on “A New York Strip”