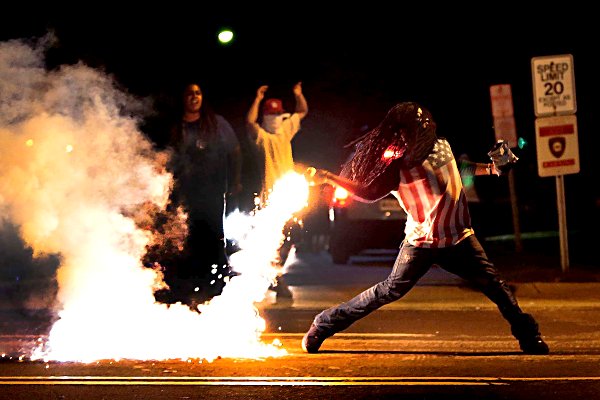 Break out your mourning crepes; the hero of the Ferguson riots has passed away.

One of the Ferguson good Samaritans immortalized in an award-winning photograph has died. According to NBC News, Edward Crawford shot himself while riding in the back seat of a moving vehicle. At least that’s the story as told by the guys in the front seat at the time.

“The victim began expressing he was distraught over personal matters to the witnesses,” said the police department’s Public Information Officer Leah Freeman. “The witnesses heard the victim rummaging in the backseat, then heard a gunshot and observed the victim had sustained a gunshot wound to the head.”

Horrible, simply horrible. I fully expect the St. Louis Cardinals to honor Mr. Crawford during tonight’s game, and dedicate a row of seats in his honor.

During the 2014 Ferguson riots, a St. Louis Post-Dispatch photographer snapped a striking image of the patriotic Mr. Crawford. The iconic photo caught the moment he helped authorities by tossing a burning device away from an orderly troop of widows and orphans on their way to Sunday school. Undoubtedly good people risked great injury to themselves while simply going about their business had it not been for the quick-thinking bravery of Mr. Crawford.

Shockingly, he did not receive an award for his heroism. In fact, the local constabulary arrested him. The charges? Throwing a flaming object towards police and knocking a police officer to the ground.