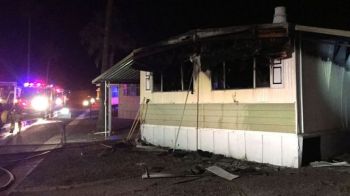 A Tucson man took some unconventional measures to rid his mobile home – shock – of spiders this week, and the results had him really fired up.

A blowtorch used to burn spider webs could be the cause of a fire at a mobile home in Tucson, Arizona, officials say. Fire crews sent to the scene on Sunday stopped the fire from spreading.

The cause of the fire is being investigated. But firefighters say they suspect a propane torch was used to burn spiders from under the trailer.

Most of you know I have spent some – absolutely fabulous – time in Arizona, and if there’s one thing I’ve noticed, it’s no one worries about spiders. Mostly because they’re freakin’ everywhere! Plus, I am also assuming this clown was born and raised in Flori-duh.