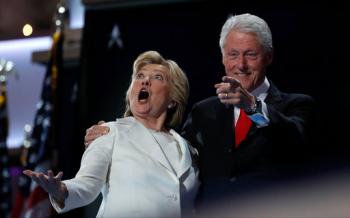 The Clinton Foundation, arguably the most corrupt “charity” ever created, has decided not to return donations made by an accused sexual predator.

According to a lawsuit, Jess Ravich, managing director for TCW Group Inc., repeatedly coerced a female employee into sex over the span of ten months. On top of his prominent role in the finance community, Ravich was also a major donor to the Clinton Foundation and Hillary Clinton’s 2016 presidential campaign.

When asked if they would return the donations from Ravich, the Clinton Foundation told The Daily Caller that, “Donations, these included, have been spent helping people by fighting childhood obesity and HIV/AIDS, combating climate change and empowering girls and women.”

In their defense, nothing empowers women more than coercing them into unwanted sex, amirite Bill?