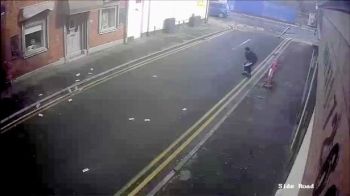 Two men were captured on video chasing money they stole as it blew down a Manchester street.

The men walked into the agents on Queens Walk on 1pm on Saturday 17 March 2018, where they demanded members of staff hand cash from the safe. They shoved the cash down the pockets of their trousers before fleeing the shop. But as they hurried away along Craven Street, notes started dropping out of their trousers and got caught up in the wind.

The men are seen desperately scrambling to catch the notes, which are scattered all over the street and pavement, before getting into a silver car which sped off towards Fairfield Road.

What, does England have no bags with dollar signs on them? Have these men no duffel bags? These clowns must have emigrated to England from Florida.

2 thoughts on “The Wind Cries Scary”