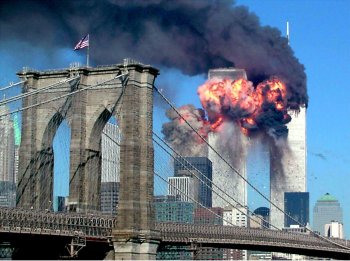 The September 11 attacks were a series of four coordinated terrorist attacks by the Islamic terrorist group al-Qaeda against the United States on the morning of Tuesday, September 11, 2001. The attacks killed 2,996 people, injured over 6,000 others, and caused at least $10 billion in infrastructure and property damage. Additional people died of 9/11-related cancer and respiratory diseases in the months and years following the attacks.

Four passenger airliners operated by two major U.S. passenger air carriers all of which departed from airports in the northeastern part of the United States bound for California—were hijacked by 19 al-Qaeda terrorists. Two of the planes, American Airlines Flight 11 and United Airlines Flight 175, were crashed into the North and South towers, respectively, of the World Trade Center complex in Lower Manhattan. A third plane, American Airlines Flight 77, was crashed into the Pentagon in Arlington County, Virginia, which led to a partial collapse of the building’s west side. The fourth plane, United Airlines Flight 93, was initially flown toward Washington, D.C., but crashed into a field in Stonycreek Township near Shanksville, Pennsylvania, after its passengers thwarted the hijackers.

9/11 is the single deadliest incident for firefighters and law enforcement officers in the history of the United States, with 343 and 72 killed, respectively.

Seventeen years later, far too many Americans have become apologists for Islamists, and football players kneel during the national anthem on 9-11. Seventeen years later, police officers like those who rushed into those buildings, lauded at the time, are now vilified as racists. Ironically, the September 11 attacks were a victory for Islam, because the culture has forever changed; and not for the better.