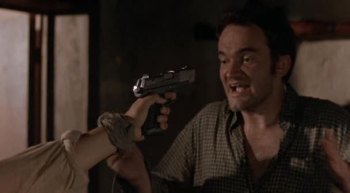 Anti-cop Hollywood director Quentin Tarantino allegedly scared off two men who attempted to burglarize his residence. Yeah, if there was ever an imposing, intimidating figure, it would be Tarantino.

The film director, whose credits include Pulp Fiction, is said to have been resting at home on Sunday night when two men attempted to burgle him.

According to TMZ, law enforcement sources claimed Tarantino confronted the pair who fled after stealing his jewelery. Authorities are believed to be reviewing surveillance footage that will help identify the criminals.

In reality, the men probably came to Tarantino’s house, looked in the window, saw Jackie Brown on the television, and ran for their lives.