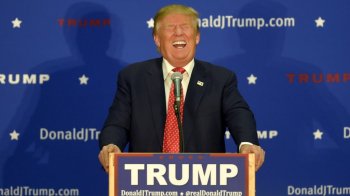 Incoming leftist House Speaker Nancy Pelosi has decreed she will not funnel any money to the border wall; a move which elicited a yawn from President Trump.

President Donald Trump indicated he will not budge on his demand from Democratic lawmakers for $5.6 billion in funding for his proposed wall along the U.S. southern border, in an extended back-and-forth with reporters Wednesday.

Trump’s showdown with Democratic lawmakers has resulted in a partial government shutdown with neither side currently indicating they will deviate from their hardline position. Trump told reporters he would not accept anything lower than $5.6 billion in funding and that he was willing to let the shutdown continue “as long as it takes.”

Democrats instead say they will offer approximately $1.6 billion of funding for “border security,” which would not be allowed to fund a concrete wall along the southern border.

How about this counteroffer? You Democrats can go fuck yourselves, and the president will keep the government shut down for the entirety of 2019. I am continually amazed that after two years the Democrats and NeverTrumpers still haven’t figured out Trump doesn’t give a fuck about their norms or decorum. The president wants what he wants, and it’s very refreshing.