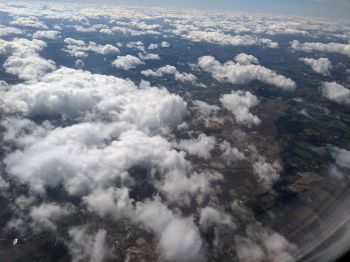 So I mentioned Parents Weekend earlier, and while it was amazing – God Bless Texas – the flight home was less than amazing.

We were booked on Southwest – easily our favorite airline – and I did not want the window seat this time. Mrs. Earp took the middle and I had the aisle, because my bladder is smaller than a lima bean. Everything was going smoothly, and there was a chance we wouldn’t have to share the row with another humanoid.

A woman carrying a small tote bag walked up the aisle and wanted to sit in the row next to us. The women there said something about not liking dogs, or being allergic to dogs, and basically told the woman to scream. I heard a bit of the conversation, and thought, “Did she say dog?” Moments later, the woman asks if she can have our window seat. I’m not going to say no – although I thought it – so she sat down. Inside this makeshift tote bag was a small white dog, poking its nose out of the carry-on.

This yippy little bastard did not seem to be a service dog, so… what the hell?

Strangely enough, the dog was the least annoying part of the flight…

For the second time in two flights, we were sitting near couples who grabbed the aisle seat in each row. Not together in the same row, but across the aisle. One of these toads was the dog-hating woman. Dude, do you hate your spouse so much that you don’t even want to sit in the same row? It’s an annoying habit perpetuated by wealthy, spoiled asshats who want to commandeer every aisle seat on the plane. Don’t be a dick, and sit together for frak’s sake!

Finally, we come to morbidly obese, white trash Eagles fan. This bloated pile of protoplasm sat next to me across the aisle, while her bloated husband took the window seat. Since both these humanoids screamed “Philly trash” no one dared to sit between them. At the beginning of the flight both were on their best behavior. When the NFL games began, they turned into giant gaping assholes.

This disgusting woman began watching the Eagles game on her cellphone, at max volume, without headphones! To give you an idea how obnoxious this bitch was, I could hear the game clearly through my headphones. Nearly every person in our area either muttered an “Are you kidding me?” or turned around and gave her the death stare.

Being an Eagles fan, she couldn’t care less.

This twat listened to the entire game at peak volume, and not one flight attendant confronted her and no passenger stabbed her in the flabby arms with a liquor bottle. It was the closest I ever came to having an all-out confrontation with someone on an airplane. When we landed, most of the passengers bitched about her while walking through the terminal. Enraged to be back in this awful town, I turned to Mrs. Earp, finally realizing the truth about Philadelphia sports fans.

“They’re entitled. They think they can do and say anything they want because they live in this garbage town.” I followed that up with a succinct, “I hate it here.”

P.S. – Mrs. Earp sent this to me a few moments ago. Apparently, all three kids put on their UD shirts today without the others knowing it. 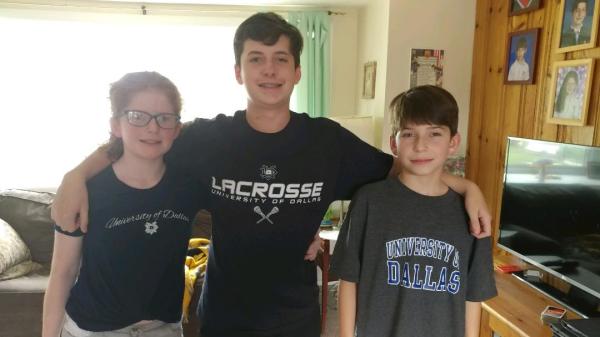 She sent the pic to Kyle, and he responded with, “Dorks.”

8 thoughts on “People Are The Worst”