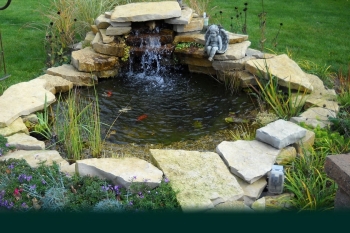 An elderly Staten Island couple celebrated a different kind of fall this October, after the husband lodged his head in his backyard koi pond. I don’t know, this seems kinda fishy to me.

A Staten Island man fell head-first into his koi pond and got stuck there for a half-hour Tuesday afternoon when trying to clean out the front-yard fish habitat.

Natale Pizzolo, 85, and his wife, Joan, told The Post he floundered and fell into a drainage ditch at the bottom of the pond. “I was just doing some maintenance to the koi pond when I fell into the hole,” he said.

When first responders arrived at the Emerson Hill house, they “could see the feet of [Pizzolo] sticking straight in the air,” an FDNY spokesman said.

What, firefighters never heard of hot yoga before?

The proverbial fish out of water told The Post he was stuck for nearly 30 minutes inside a small rock pond before he managed to call out to get the attention of Joan, who was inside the house at the time. “I heard a faint scream from outside,” Joan said and realized she hadn’t seen her husband in a while.

Natale originally asked the salesman, “What is that?” The salesman replied, “It’s a pond for koi.” Natale retorted, “Then flush is down the koilet!”

6 thoughts on “That Sinking Feeling”