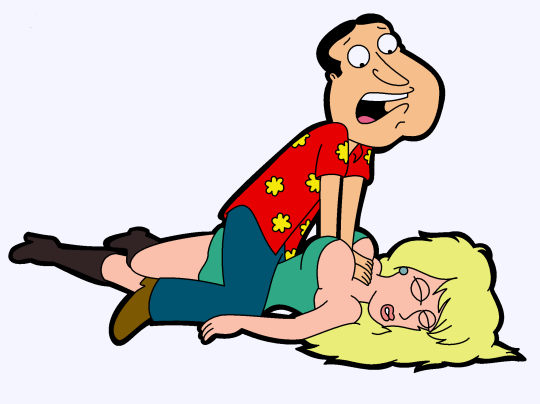 So yesterday began my second week of nightwork. Nightwork is a two-sided sword; it’s great to sleep late, but it’s also the busiest time of the day. When I walk through the door the stress begins, so I usually don’t want to be bothered until I’m settled in and ready to enter the day’s jobs.

The sergeant walks in, and after a few minutes of prep, he starts giving people dates for our yearly classroom training. All four classes need to be finished by November, but my division wants the classes done as soon as possible. (They sent a guy to the pistol range in a snowstorm last week.)

So the sergeant is giving out dates for class training, and he turns to me. “Wyatt, I’m scheduling you for CPR on February 25th.”

I assume the sergeant either hates me or has the onset of dementia. I politely reply, “Do you think that’s a good idea?” The sergeant looks at me, puzzled. Finally, I say, “Do you think it’ a good idea to send me to CPR with a torn bicep and possible rotator cuff injury.” I mean, the compressions alone would probable be unbearable.

The sergeant stops, and starts with, “I mean, you could probably do it…” A moment later, the lieutenant walks up after hearing the conversation and says, “Um no, we’re not doing that. If he wants to take regular classroom training, do that, but his surgery is supposed to be at the end of February.”

P.S. – It’s been a week and a half since the appointment with the surgeon, and I still haven’t received a date for the surgery. I called on Wednesday and left a voicemail with the surgery scheduler, and she has not gotten back to me. So this is going to be awesome, especially when they call and say “It’s tomorrow,” and I tell them I didn’t get a Covid test and didn’t get the surgery clearance. It shouldn’t be this difficult.