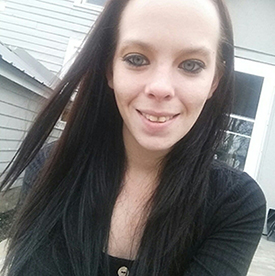 Meet Nicole Holland of Fulton, New York. Nicole is a bored housewife looking for some excitement, so she allegedly decided to give her Doberman Pinscher a plate of delicious heroin. S-M-R-T.

According to police, Nicole Holland, 26, was arrested yesterday on a misdemeanor charge in connection with the death of the dog, a miniature Doberman Pinscher named “Champ” who weighed about two pounds when it died last month.

A necropsy determined the puppy died from opioid intoxication, according to the New York State Police.

I’m sure Holland is devastated after allegedly murdering her dog.

Investigators allege that Holland, who lives in Fulton, a city 30 miles north of Syracuse, left a plate containing heroin on the floor of her home. After watching the puppy lick up some of the drug, Holland subsequently snorted the remaining heroin through a straw.

Holland, a mother of two young children, was not charged with any narcotics counts since her heroin use was not witnessed.

Honestly, I think Holland’s bigger problem is the five-head she has going on in that photo.

14 thoughts on “The Dog Days Of Bummer”