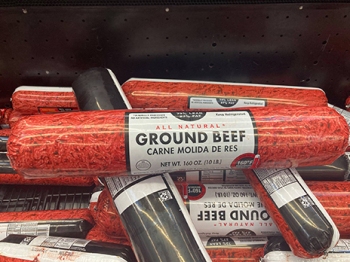 A Cleveland-area woman was arrested after she initiated a fight inside a Walmart store with her former neighbor. The incident began with an argument and ended with a meat log.

The confrontation at the store in South Euclid involved two women who once lived in the same duplex, cops say. The woman who was battered with the ground beef previously secured a protection order against the alleged Walmart assailant.

According to police, when the pair spotted each other, the accused woman threatened to beat up the other woman (as well as her seven-year-old daughter, who was with her mother at Walmart).

The attacker, cops say, pulled down the victim’s mask and attempted to spit on her. When she missed the target, the woman reached into the victim’s shopping cart and removed the prepackaged meat log, which she then used to strike the victim in the face, police charge.

In some places you gotta pay extra for that. I guess you could say, “She has the meats.” I wonder if she gets as much “meat” at home, if you know what I mean?