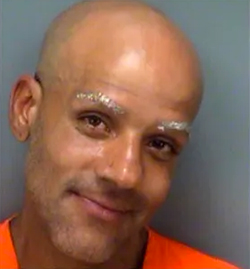 Eric likes having fun in the great outdoors, especially when he can prance around the (literal) trailer park holding his Johnson and a spicy pickle. I really wish I was making that up.

Pictured above, Detiege was arrested for exposure of sexual organs, a misdemeanor, and booked into the Pinellas County jail. He was released after posting $150 bond, but was back behind bars a week later after getting arrested on a felony theft charge for stealing Red Bull and skinny jeans from a Walmart.

Hmm, I wonder if the skinny jeans had a pocket large enough to hold a pickle?