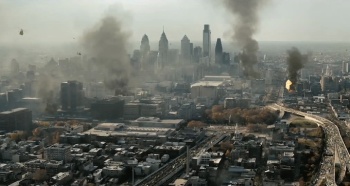 Over the past few years, my greatest thrill has been watching the coordinated self-destruction of Philadelphia by its drunken idiot mayor, its indicted City Council, and its police department.

Philadelphia politicians started the ball rolling by allowing BLM (Burn, Loot, Murder) to ravage the city with impunity, then released the thugs without any charges. Then Covid hit, and the “mayor” shut down the city, which eventually destroyed the city’s restaurant industry. After that, the “mayor” a man who cannot spell the word vaccine, forced every city worker to get vaccinated, lest you be suspended and/or fired.

Now, the City Council has passed an executive order declaring the initiation of a “Driving Equality” policy. Hmm, I wonder which set of people will benefit the most from this idiotic order?

Philadelphia City Council passed a bill, entitled Achieving Driving Equality, which limits Philadelphia Police officers’ ability to stop vehicles for certain violations of Title 75, the Pennsylvania Motor Vehicle Code (MVC). In this legislation, City Council has designated eight (8) MVC provisions, listed below, as “secondary” violations. Any MVC provision not listed below is considered a “primary” violation. The below listed “secondary” violations, may not be used as the sole basis to conduct a vehicle stop/investigation. The new provisions take effect on February 24, 2022.

So the city is ordering us to look the other way when it comes to automobile/traffic violations. Expired registrations, expired inspections, putting the license plate in the rear window, no lights on at night; all this is perfectly legal now, and we cannot stop a vehicle for any of these infractions.

Here is the entire list of infractions that are no longer illegal inside the city limits.

When conducting a car stop, Philadelphia Police officers will not use any of the following “secondary” violations as the sole basis for the vehicle investigation:

§ 1310.1 (c).Temporary Registration Permits. – driving with temporary registration permit placed at an improper location, as long as the permit is otherwise visible

§ 4302. Periods for Requiring Lighted Lamps. – Operating a vehicle with a single headlight, brake light, or a single bulb in a multiple bulb vehicle light is no longer a basis to make a stop and is considered a secondary violation. However, a stop is still permitted, if more than one headlight, brake light or running light are not operating. This is a primary offense.

The city of Philadelphia, birthplace of the Constitution and the Declaration of Independence, has officially become a city of anarchy.