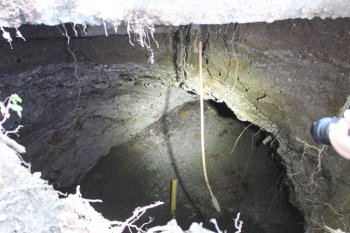 Pennsylvania’s Cheltenham Township – about a mile from where I work – is dealing with a giant sinkhole which emerged on Chelten Hills Drive. The sinkhole is massive, and instead of avoiding the hole, Cheltenham residents are coming to take a gander.

Cheltenham Township officials are pleading with residents of the Montgomery County community to stay away from a gigantic sinkhole and to abide by road closures that have been put in effect while the situation is addressed.

The sinkhole emerged along Chelten Hills Drive between Church Road and Rodgers Road, creating concerns about the stability of the roadway and the possibility of a gas leak. Last Sunday, Cheltenham Township Emergency Management posted a notice for an emergency closure of the stretch due to the sinkhole.

But by Monday, the township observed that lawbreaking motorists were simply going around the barricades.

“Last night we received a call, ‘People are standing on / near the hole with flashlights. They are looking down the hole.’ Does anyone see the problem here?” the township said.

Coming from someone who knows people in Cheltenham, no, they do not see the problem here. The residents will still treat this as a tourist attraction and continue visiting the site until someone falls into the sinkhole and is killed. Because they’re dumbasses.