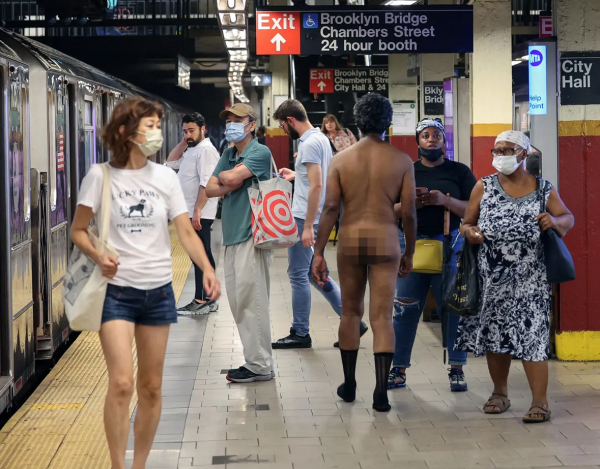 A naked black man was walking through a New York City subway stop, and hardly anyone gave the man a second look. The man was only wearing black socks and a Covid mask.

New Yorkers barely flinched Thursday as a naked man wearing nothing but dress socks strolled through a Manhattan subway station and onto the street, according to new photos.

Jaded straphangers seemed unsurprised at seeing the apparently disturbed man, as he sauntered out of a No. 6 train car and onto the City Hall subway station platform at about 9 a.m.

Some didn’t even look up from their phones while others glanced at the NSFW scene and gave little reaction — either oblivious to what was happening or taking the old-fashioned New York approach by minding their own business.

New York was great when Giuliani was in power, but his successors have turned the city into a drug-infested war zone with a Soros DA who refuses to prosecute criminals. No wonder New Yorkers didn’t even blink their eye at this naked dude.

7 thoughts on “New York Is A Garbage City”