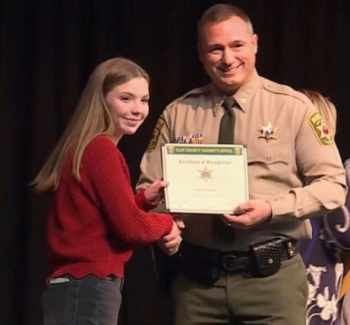 Ava and her boyfriend were headed for some shopping when they came upon something no one ever wants to see; a gunfight between police officers and a thug.

Ava Donegan never set out to be a hero. Back on Oct. 1, she and her boyfriend were in Excelsior Springs, Missouri, for some shopping. Then came the gunfire. Then came the wounded police officer. Then came the moment the training her father instilled in her kicked in.

Unknown to her, as she was driving that day, two officers of the Excelsior Springs Police Department were trying to detain a suspect who fired upon them, striking Officer Adam Stott in the wrist and arm.

Ava’s father trained her in first aid, and she immediately helped the officer who was shot. She used the officer’s tourniquet, which helped stop the blood loss.

“Officer (Andrew) Stott ran to the vehicle Ava was in after he got shot. She could see he needed help. He had been shot in the right arm and in the left hand. Officer Stott pointed to where his tourniquet was outside his vest. Ava helped to retrieve it and put it on his wounded right arm,” Sheriff’s Office Public Relations Manager Sarah Boyd said at the ceremony as she summed up the incident.

“Because of his injuries, he could not use his radio so Ava pressed his radio button so he could tell dispatch what happened. Finally, she helped him take off his outer vest so he could receive medical treatment,” Boyd said. (H/T – Redneck Geezer)

Ava, who is seventeen, is a legitimate hero who likely saved Officer Stott’s life.

Take a look at the short video at the link. Ava looks almost embarrassed despite her bravery.

10 thoughts on “Heroism Comes In All Shapes And Sizes”