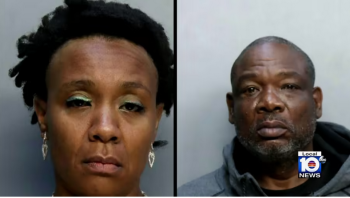 Meet Glenese Dingle and John Henry McDougle of Sunny Isles Beach, Flori-Duh. I have to be honest, that Gelense is definitely a looker and obviously not a transvestite. Totes magotes.

This odd couple stole $1,500 worth of alcohol, fled the scene, and – get this – pulled into a dead end street, ending their Selma and Louise trip right quick.

Photos taken by the department’s officers show stacks and stacks of alcoholic beverages, worth about $1,500, from stores in Sunny Isles Beach and North Miami Beach inside an SUV driven by Glenese Dingle, 40, of Miami.

According to a police report, Dingle and John Henry McDougle, 54, of Fort Lauderdale first stole from a Total Wine store and an ABC Wine & Spirits store in North Miami Beach.

Police say the two used distraction as their MO.

“They went into the store and (Dingle) was asking nonsensical questions and when she was doing that, (McDougle) filled a plastic bin with wheels with as much alcohol as he could and he said ‘let’s go,’” Sunny Isles Beach police Sgt. Brian Schnell said.

Hmm, I wonder which side of the jail cell she/he will be reporting to?

Capouch was vacationing in fabulous St. Petersburg, Florida, and he decided to stop at a beachfront bar. After multiple drinks, Capouch decided he needed to take a pee… in a place no one ever wants to see urine.

According to police, an employee of the Jimmy B’s Beach Bar in St. Petersburg was “attempting to get ice from the ice machine” around 12:30 AM when he discovered Henry Capouch, 30, “‘pissing’ on the ice in the machine.”

When the worker, Richard Klees, told Capouch to stop, the accused urinator cursed Klees and shoved him “a couple times” Capouch subsequently shoved a security guard.

Upon arriving at the bar, which is part of the Beachcomber resort, police found Capouch and his girlfriend on the nearby sand. Capouch, cops charge, “was actively resisting” and “not obeying lawful commands while being detained.” (H/T – Mike AKA Proof)

It was a busy night for one New Hampshire State Police trooper Sunday, after he stopped two separate Massachusetts men driving at a high rate of speed while drunk.

New Hampshire State Police officials said a trooper who was monitoring traffic on I-93 in Bow saw a vehicle approaching his location at a very high rate of speed at about 3:20 a.m. Sunday.

The trooper obtained a radar reading of 120 mph as the vehicle approached and passed him. The trooper then stopped the vehicle and identified the driver as 25-year-old Jacob Hulsoor, of Boston’s Dorchester neighborhood.

Most of New Hampshire’s roads are pretty good, with long stretches. They are not, however, Formula 1 race circuits.

NHSP officials said the same trooper who arrested Hulsoor had arrested another driver earlier in his shift.

That trooper stopped a vehicle that had been traveling 100 mph on I-93 in Concord and identified the driver as 47-year-old Lionel Desilva, of Merrimac.

You’d think the Massholes would stick to driving in their own state while drunk, and not headed out of state to be arrested.

An Irish man who was fired after drinking himself comatose inside a supermarket has won his lawsuit, and will receive a reward of $40,000. Gotta love the Irish!

A supermarket has been ordered to pay nearly €40,000 for sacking an alcoholic manager who drank himself “comatose” on vodka on the premises when his employers went away to a wedding.

The supermarket’s owners called it an “incalculable” breach of trust which meant the manager had broken promises made after similar behaviour the previous year.

Yes, the defendant is a man, but I really wanted to post an Irish girl. Sue me.

The Workplace Relations Commission (WRC) found the manager had been discriminatorily sacked because he was an alcoholic, and that in the absence of precedent in the area, it could not accept the breach of trust as a defence for discrimination.

Hmm, this gives me an idea. Maybe if I drink myself into oblivion, I can also get a windfall of money? I mean, it can’t hurt to try, amirite?

A Saline, Michigan police officer drove a drunk man home from an Oktoberfest celebration. Seeing he was in no way able to drive on his own, the officer did the driving for him. Then, the stupid set in.

On Sept. 16, a sergeant with the SPD observed two apparently intoxicated people walking back to their vehicles. The sergeant determined neither man was well enough to drive so he drove them to one of their homes.

Shortly before 1 a.m., Sept. 17, a Saline Police officer on patrol spotted a vehicle moving slowly on Ann Arbor Street. The vehicle turned on to McKaey Street where it was half on the curb and half on the road. The vehicle parked for a moment. The driver started again and turned on to North Harris Street without signaling and then turned into the Saline City Hall parking lot where he attempted to turn around. Police stopped the vehicle there.

This drunk driver was the man the officer originally drove home. 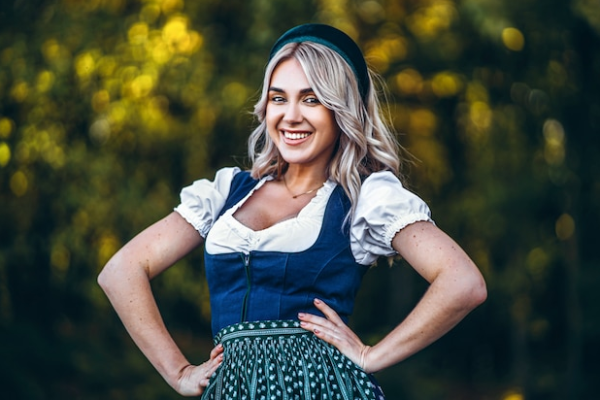 After a two-year absence, Germany is finally rekindling Oktoberfest in Munich and other cities around the country. It’s a shame what has happened to Germany; frightened by the pandemic, gave up fossil fuels, and begged Russia to sell them their oil. It’s going to be a dark winter for them.

The beer is flowing at Munich’s world-famous Oktoberfest for the first time since 2019.

With three knocks of a hammer and the traditional cry of “O’zapft is” — “It’s tapped” — Mayor Dieter Reiter inserted the tap in the first keg at noon on Saturday, officially opening the festivities after a two-year break forced by the coronavirus pandemic.

Germany should have halted Oktoberfest in 2020, but there was no reason to eliminate it in 2021.

The Oktoberfest has typically drawn about 6 million visitors every year to packed festival grounds in Bavaria’s capital. The event did not take place in 2020 and 2021 as authorities grappled with the unpredictable development of COVID-19 infections and restrictions.

Those worries were put aside this year. The city announced in late April that Oktoberfest would go ahead, and Reiter said Saturday that “it was a good decision.”

Of course it was a good decision. Politicians kept most Germans locked in their homes, and clamped down on their freedoms. Oktoberfest was the only way to get the country moving again.

I sincerely hope the Germans have a good time, because their future does not look promising.

Michael was just driving around town when he was pulled over by an eeeeevil police officer. The officer smelled alcohol emanating from Michael’s pores, and decided to break out the breathalyzer.

A Clearwater man who was arrested for allegedly driving under the influence had a blood alcohol level more than five times the legal limit.

FIVE TIMES the legal limit. How is this dude still alive?

According to an affidavit, deputies got a number of 911 calls about Michael Sewell, 42, driving a Nissan erratically in the area of East Lake Road and Eagle Cove Boulevard around 9:50 a.m. on Saturday, Sept. 10.

The deputy who pulled over Sewell noted his breath smelled like alcohol, he was unsteady on his feet and he had glassy and bloodshot eyes. He was unable to perform a field sobriety test.

I mean, sure, he shouldn’t have been driving after that much alcohol, but his hair is… perfect!

Meet Amy Ann Harrington of Madeira Beach, Flori-Duh. Amy was stopped for driving under the influence, and when she was asked to take a sobriety test, Amy decided to show off her dance moves instead. Sadly, Amy received a 4.5 by the Florida officer.

Amy Harrington, 38, of Madeira Beach, rear-ended another vehicle about a mile from her home on April 27. When Pinellas County deputies arrived, officers said her eyes were bloodshot and watery.

Harrington tried to walk a straight line during a sobriety test along a parking space marker when she gave up and started dancing.

She “struggled to follow instructions, and was unsteady on her feet almost falling,” according to arrest documents. Harrington, clad in a black skirt and white top, danced wildly in the footage, before she was asked to walk the line.

You may remember Amy from a May 1st post where she was also danced an Irish jig to get out of a DUI arrest. Arrested twice in three months. Well done!

“Do you want to pay attention so I can give you the instructions?” a deputy administering the test asked.

“Yeah, well, you sound like my ballet coach, so, sounds about right,” Harrington answered before busting a move.

Now this goes without saying, but absolutely yes… like a screen door in a hurricane. 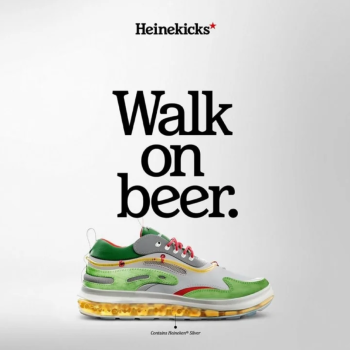 A sneaker designer hooked up with Heineken beer to create “Heinekicks” sneakers where the soles are filled with Heineken Silver beer.

Dutch beer company Heineken recently teamed up with sneaker designer and customizer Dominic Ciambone, aka The Shoe Surgeon, to create a special sneaker with beer-filled soles.

To celebrate the launch of Heineken’s newest product, Heineken Silver, the Dutch brewer commissioned The Shoe Surgeon to create a sneaker that embodied the identity of their smooth, easy-to-drink new beer, and he delivered. The so-called “Heinekicks” feature the company’s iconic color scheme – green, white and red – as well as the Heineken logo, and handy bottle openers built into the tongues. But what really sets them apart from any other sneakers is the liquid floating in their transparent soles – actual Heineken Silver beer.

I mean, I guess it’s innovative, but until they get a mechanism to drink said beer, this is nothing but a waste of time. Wake me up when they activate the beer pump. 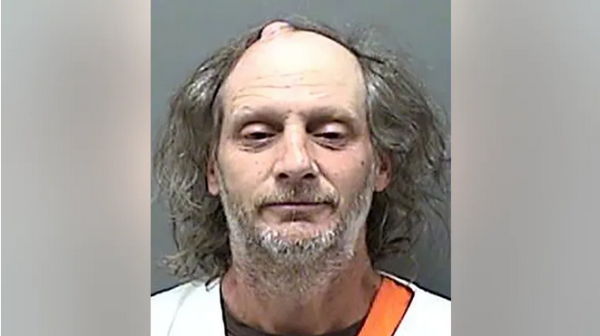 Meet James Fuerstenau, a beer connoisseur which would put Laverne and Shirley to shame. James was driving through Caledonia, Wisconsin drinking some beers and having a good time, despite his driver’s license was revoked. Jimmy is not exactly Milwaukee’s Best.

Prosecutors say 51-year-old James Fuerstenau had open beer cans in his SUV at the time of his arrest. He is also charged with driving with a revoked driver’s license due to his prior OWI convictions, as well as misdemeanor bail jumping.

It’s difficult to believe someone from the Milwaukee area would be drinking alcohol.

A Racine County sheriff’s deputy made a traffic stop on an SUV reported for reckless driving near 7 Mile Road Interstate 41/94 in Caledonia. As deputies approached the SUV, the driver, since identified as Fuerstenau, dropped his keys out of the window and got out before being told to do so.

Maybe that’s where he got the lump, or tumor, on the top of his head?

Once in custody, per the complaint, Fuerstenau admitted to using cocaine and smoking marijuana earlier in the day, too. He also admitted to drinking what was found in the SUV while he was driving and said: “I was drinking and driving.” The complaint also states he told deputies he had been drinking since he was 9 years old and that he “drinks alcohol like it is coffee.”

Pfft, lightweight. I’ve been drinking Hawaiian Punch since I was six, and I never got arrested.