Doctor Anthony Fauci, who we now know was fully aware the ChiComs were using gain-of-function regarding Covid, now claims you should be vaccinated if you attend a school or wish to travel.

If you are not vaccinated, Fauci believes you should be dismissed from the school and not be allowed to board a plane or a ship.

Dr. Anthony Fauci says that Biden’s new vaccine mandates don’t go nearly far enough in enabling the US to reach herd immunity, and that vaccine requirements should be in place for all travel and all educational institutes.

This piece of shite is a fascist, through and through.

Remember “fifteen days to slow the spread?” That was eighteen months ago. Now that the left has full control, they will make damn sure we are not allowed to live our lives for the duration of their time in the White House.

When Fauci was asked if he would support vaccination mandates for travel, he said that he would. “I would support that if you want to get on a plane and travel with other people, that you should be vaccinated.”

As long as you aren’t a member of Congress or an illegal immigrant; both those groups are exempt from the vaccine mandate. Funny how that works.

Sunday evening was a nightmare. We walked into a search warrant for a DNA gun swab, a domestic violence gun pointing incident which needed a search warrant, and a triple shooting which turned into a homicide. Thanks to the city’s mission to defund the police, we only had five detectives working.

At about 5pm, one of the dumber districts brought up a stolen gun report. The story was quite ridiculous, even for this division. The report read more or less as follows:

“The victim stated she was at her mother’s residence and placed a bag on top of her vehicle. The bag contained a handgun and $900 USC – totally believable. The victim drove away with the bag on top of the vehicle, and when she returned – inconceivably – the bag, USC, and firearm were missing.”

The young woman lives outside the city in a fairly wealthy suburb. She simply decided to visit her mother – who lives in one of the city’s most violent, drug-infested neighborhoods – while carrying a bag full of money and a loaded firearm.

I won’t even mention the idiocy of driving around with a bag containing a loaded pistol. Had she been stopped by police she would have, at best, seen her gun confiscated, or at worst, been arrested for firearms violations, since she had no permit to carry.

Although I am not the assigned detective, I can tell you with certainty what happened. The victim drove to Philadelphia “to see her mother,” but never stopped at the house. Instead, she hooked up with one of the local hood rats, and sold the firearm. She made a lot of money, the hood rat received a pistol and a butt-load of ammunition, and the gun will likely be used in a shooting by the end of the week.

The Sing Us The Song You’re The Piano Man Caption Contest is now over.

Top Five Entries:
5. The all female remake of The Piano didn’t go as well as expected when nobody could carry the piano to its new home. – Ingineer66
4. “Honey! Call the piano tuner. It sounds a little flat!” – Mike AKA Proof
3. All that Billy Joel has left after his latest divorce. Gary Moore
2. I’ve never seen a piano on meth before. – RudyTBone

WINNER! – Is there a coyote under the piano? – Cathy

An American woman was sitting in her residence minding her own business when she noticed her neighbor put up a surveillance camera pointed at her window.

A WOMAN has posted a video online claiming that her neighbour has installed a camera that looks directly into her window – and people are begging her to report it. TikTok user @bbzeb from America shared a video of herself reacting to the camera that she spotted on the building next door.

“When your neighbour installs a camera directly towards your window,” she wrote.

Throughout the video, she can be seen sipping wine as she shares clips of the camera at different angles.

Now, before you ask, I am not this woman’s neighbor. I mean, give me a little credit. I usually spy on my hot neighbors by peeking through the blinds and yelling, “Hey baby, come to Butt-Head.” 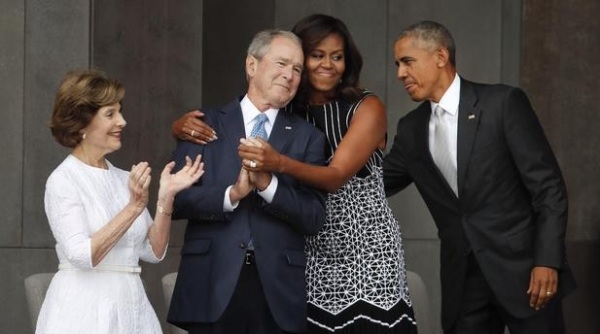 Violent extremists in the United States and abroad are “children of the same foul spirit,” former President George W. Bush said in his speech commemorating the 20th anniversary of the September 11 terror attacks.

In the speech, Bush likened domestic extremists to foreign terrorists who attacked the U.S. 20 years ago.

The violent extremists to which Bush is referring are, among others, the January 6th “insurrectionists.” You know, the unarmed American citizens who entered the Capitol Building; the building which belongs to the American people, and not the politicians. The building where feckless coward Capitol police officer Michael Byrd murdered Ashli Babbitt in cold blood. That “insurrection?”

“We have seen growing evidence that the dangers to our country can come not only across borders, but from violence that gathers within,” Bush said.

I agree. By the way, Mister President, when was the last time you condemned the violent extremists of Antifa and Black Lives Matter? Never? Then go home and get your f**king shinebox.

I am truly ashamed I ever voted for this man.

The entire police force of Kimberling City, Missouri has resigned. Every single officer quit the force to find work elsewhere. The police chief and the officers claimed lack of support, defunding the police, and unqualified officers and applicants.

An entire Missouri police department, including the police chief and his officers, resigned leaving the city of Kimberling without immediate authority.

Citing problems like an inadequate pay rate and not having the right tools to do the job, the department has local leaders struggling to find replacements, especially when rhetoric against law enforcement is high amongst some, Fox News reported.

Personally, I think this is great. When people are constantly disrespected, ridiculed, and forced to work in unsafe conditions, they will eventually realize it’s easier to just find work somewhere else.

What preempted the mass exodus, according to Rader, was Kimberling City Police Chief Craig Alexander’s resignation on Aug. 23. He wanted changes from the town’s mayor and he wanted to better himself, Fox News reported.

Soon after, Alexander’s resignation was joined by three officers and a sergeant, with their reasons for quitting being the absence of a police clerk to assist the department, not having qualified officers in the department, and wanting new opportunities with a better pay rate, according to NBC Springfield, Missouri.

The article ended with this:

About 2,600 officers from New York retired in 2020, according to The New York Times, compared to the 1,509 who retired the year prior.

2,600 officers. Wow, that’s an amazing statistic, and it explains how much the NYPD despise Bill de Blasio and his gang of anti-cop leftists.

Angelica is not the most stable person you could come across, and apparently the Arizona sun has short-circuited her brain. Thankfully, Angelica has an answer to her symptoms… cocktails!

Angelica allegedly stalked the victim’s house through the night and apparently started throwing the Molotovs shortly after daybreak. What a way to start your day!

Two of the victim’s cars were damaged by the bombs. The total cost of damages was around $8,000, according to the victim. Witnesses said a silver SUV had been sitting outside the victim’s house multiple times early in the morning.

Pratt’s SUV was traced back to a home near Thompson and Lum avenues, where she was found. She was arrested and admitted to starting all three fires, MCSO said.

That’s a shame, because Angelica is such a beautiful woman. /eyeroll

You may remember the vaunted drone attack ordered by the illegitimate president, days after an ISIS-K terrorist murdered thirteen soldiers and nearly two hundred civilians. The Biden administration claimed they killed two high-profile members of ISIS, but continually refused to name them. If you thought that sounded fishy, you would have been correct.

The US mistakenly targeted and killed an innocent aid worker for an American company in a drone strike in Afghanistan, the New York Times suggested in an investigation into the country’s final military action of the recently concluded 20-year war.

The victim, the newspaper said, was 43-year-old Zemari Ahmadi, who died with nine members of his family, including seven children, when a missile from a US air force Reaper drone struck his car as he arrived home from work in a residential neighborhood of Kabul.

For the record, I specifically said this after the drone strike was announced. If they hit “high-profile targets,” why would they not name them?

What the US military observers figured was Ahmadi acting suspiciously, the newspaper said, was him going about his normal business as a worker for the California-based aid group Nutrition and Education International.

His duties that day included dropping off colleagues at various places in Kabul, according to the director of NEI in Afghanistan interviewed by a Times reporter, and the “explosives” in the vehicle were water cartons that Ahmadi filled from a hose at his office and was taking home to his family.

The New York Times and The Washington Post conducted investigations, and both came to the same conclusion. Biden killed the family of a man who was working for an American corporation.

This is a photo of one of Ahmadi’s daughters, slaughtered by the Biden administration so they could claim they were tough on ISIS. They killed no high-profile targets. They slaughtered an innocent family.

So Friday night was a special for me and my career. I was presented with my 25-year service plaque from the police department.

Unfortunately, I reached twenty-five years in 2019, but better late than never, huh?

The plaques were delivered in 2019, and when Covid hit, everything went to hell. A multitude of plaques were left in the captain’s office, and it took the administration two years to remember they were back there.

For the record, those who know me know I don’t like ceremonies, especially when I’m involved. It’s embarrassing, and I would just rather it be handed out and we continue with our day. My lieutenant presented the plague in front of my coworkers, and said a multitude of nice things about me, claiming I have “held this squad together for the seven years (the lieutenant) has been assigned here.”

The speech was very humbling.

My squad bought pizzas, Buffalo wings, and a lot of other goodies, which we could have scarfed down if there weren’t two active shootings. Either way, it was a nice evening for me and my coworker Tommy, who celebrated twenty years in the department.

A few Florida beachgoers were sunning themselves on the sand when someone found something very fishy on the beach.

A section of Florida beach was evacuated Thursday after residents found land mines in the area.

The Indian River County Sheriff’s Office said residents found a mine against a sea wall in the South Beach area.

Luckily a wicked smaht resident brought a device cap to the scene.

Deputies said a second device cap was brought back by roadway by one of the residents.

Because who doesn’t want to carry around land mine parts?

The Air Force Bomb Squad removed both land mines without issues and they were taken to their base to destroy them.

Wow, the Chair Force responds to land mine calls? Do they land their fighters, plant some mines and head back off into the wild blue yonder?