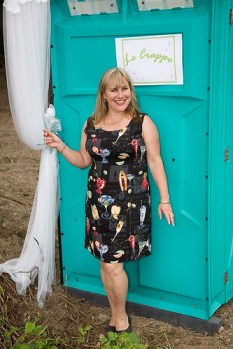 A Tennessee couple – hmm, I figured it would be Florida – were arrested after having sex in a bathroom, then boinking in a less sanitary bathroom.

According to arrest warrants, the Clarksville Police Department was called to O’Connor’s Irish Pub on Tylertown Road at about 1:19 a.m. Saturday.

A security officer told police a man was in the women’s bathroom, and then unlocked the door for them. While one officer escorted the 26-year-old Clarksville man out of the bathroom, a female officer told the “completely naked” 28-year-old woman to get dressed.

“Instead, they both entered the nearby Porta-Potty,” according to warrants. “Officers banged on the door several times before they opened it. Both subjects’ clothing was again disheveled. It was clear they were attempting to fornicate.”

Maybe it’s just me, but if I was the responding officer, I would have gently nudged the porta-potty with my cruiser, laughed as it flipped on its side, and sped away. Of course, I’m kind of an a-hole.