You may remember the post from October 28th, where I wrote about Kevin’s entrance exam for Archbishop Ryan High School. Kevin ended up earning a score of 97, and we were hoping that maybe, just maybe, he would get some extra financial aid for his efforts.

Kevin did better than we imagined…

Congratulations! It is with immense pleasure that I inform you that you’ve been selected to receive the President’s Award to attend Archbishop Ryan High School. Each year, students who have distinguished themselves through outstanding academic achievement, personal excellence, and stellar performance on our Presidential Scholarship & Placement Test are chosen from the entering class to receive this honor.

Kevin scored a 97 on the test. The highest score you can achieve is a 99. Slacker.

I have to congratulate you on your amazing performance on our entrance test. This is a great honor! You’ll receive an official letter in the mail within the next couple of days with the details of your scholarship and test results. This will give you more time to celebrate and do a happy dance.

I am so totally and completely proud of him. The kid is a super genius.

P.S. – Kevin is still in the running for the Neumann Scholarship, which is a free ride through high school. 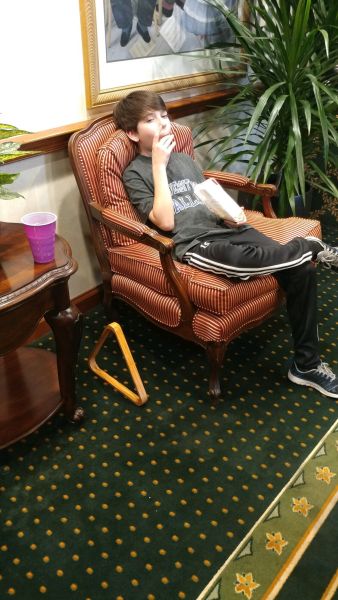 Looking at this picture of Kevin, you would likely think he is just some teenage slacker who sits on his butt all day. You would ne sadly mistaken.

A week ago today, Kevin and I went to the Open House for my and Mrs. Earp’s Alma mater; Archbishop Ryan High School. Yes, he was accepted to the private prep school, but Kevin thinks like an adult. Kevin continually tells me the prep school is too much money so he wanted to look around for other options.

It was probably the first time I’ve been through the school since the late 80’s, but it still looks pretty much the same. Kevin asked why all the classroom wall clocks were square, to which I had no answer, except, “It’s always been like that.”

During the tour, he was enthralled by many things. The computer teacher really seemed to know his stuff, and Kevin is really into computers. They have classes which teach you Microsoft programs and a coding class. Kevin was really excited about those prospects. While walking around the gym, he stopped to look at a few of the sports teams and school clubs. Kevin now wants to join the wrestling team – if he decides to go to Ryan – and is interested in the choir and singing. No idea where that came from.

Anyway, it was a nice evening and he seemed to like the school.

On Saturday, Kevin took the entrance exam. When he came home, he said the test was similar to the Holy Ghost exam, and he thought he did okay.

Yesterday we received his scores. Kevin came out with a 97. NINETY-SEVEN!

All schools are different, but a 97 would earn a student a scholarship at Holy Ghost. Hopefully, Kevin will get something for his amazing score.

I say it often, and it bears repeating. Kevin is arguably one of the smartest kids I have ever known. We are all very proud of him and his giant brain.