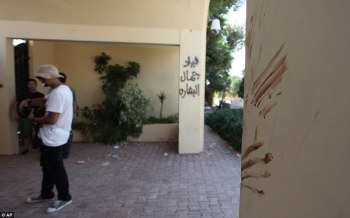 Judicial Watch submitted a Freedom of Information Request for telephone transcripts from the Department of State the day of the Benghazi terrorist attack. The results will surprise, but not shock you.

Judicial Watch today released 54 pages of new State Department documents, including a transcript of a September 12 2012, telephone conference call with congressional staffers in which then-Under Secretary of State for Management Patrick Kennedy admitted that the deadly terrorist assault on the Benghazi Consulate was not “under cover of protest,” but was, in fact, “a direct breaching attack.”

Remember, Barack Obama, Hillary Clinton, Susan Rice, and a multitude of other Obama flunkies assured us the attack was initiated by a YouTube video. The creator of the video was subsequently arrested and spent nine months in federal prison for a “probation violation.” All because of a lie.

There is more below the fold…

END_OF_DOCUMENT_TOKEN_TO_BE_REPLACED

A Freedom of Information Act request from Citizens United has uncovered emails which reveal one of Hillary Clinton’s aides was feeding questions to Senator Robert Menendez during the first Benghazi hearing.

The questions were meant to provide cover to Clinton and present an alibi on the night of the attack.

Newly released emails suggest a senior Hillary Clinton aide stage-managed her first hearing on the Benghazi terrorist attack by feeding specific topics Clinton wanted to address to Democratic Sen. Robert Menendez, who at the time was acting chairman of the Foreign Relations Committee.

“We wired it that Menendez would provide an opportunity to address two topics we needed to debunk (her actions/whereabouts on 9/11, and these email from Chris Stevens about moving locations,)” Clinton media gatekeeper Philippe Reines wrote to Chelsea Clinton the morning of the Jan. 23, 2013 hearing.

Right out of the gate, the first hearing question from Menendez that day covered both topics referenced by Reines.

It’s relatively effortless to answer questions you know beforehand, even for the ungainly Hillary Clinton. The difficulty comes when a national crisis arises and the inept Secretary of State is ill-equipped to handle the situation.

I apologize for the unending Clinton posts, but there is literally no end to this family’s corruption.

A Freedom of Information Act lawsuit filed by Judicial Watch has uncovered thirty deleted emails from Hillary Clinton’s home-brewed server. The emails are said to focus upon the Benghazi attack; emails which she claimed she turned over to the State Department.

Another day, another lie.

The State Department said Tuesday it has found approximately 30 emails from Democratic presidential candidate Hillary Clinton’s account that could be related to the 2012 attacks on two U.S. government facilities in Benghazi, Libya.

The new documents were found among the roughly 15,000 emails forensically recovered by the Federal Bureau of Investigation from Mrs. Clinton’s personal email server as part of its investigation into whether she or her aides mishandled classified information.

How many times does this woman have to be caught in a lie before people finally get it? Hillary Clinton is a compulsive liar. She shows complete contempt for the law, then feigns indignation when when questioned about it. Rewarding her with the presidency will only embolden her further.

In newly-acquired emails, the Defense Department claimed they had forces standing by to rescue Ambassador Chris Stevens and his personnel during the attack on the American embassy in Benghazi.

This goes against Barack Obama and Hillary Clinton’s claim that forces were not available.

Jeremy Bash, then the Defense Department’s chief of staff, wrote in an email to top aides to Hillary Clinton the night of Sept. 11, 2012 that Gen. Martin Dempsey and the Joint Chiefs of Staff had “identified the forces that could move to Benghazi.”

“They are spinning as we speak,” Bash wrote within hours of the start of the attack.

While parts of the email were redacted, the message indicates the Pentagon was waiting for approval from the State Department to send the forces in. That help never arrived for the Americans under siege at the Benghazi compound.

So let’s see, Clinton lied about the motive of the attack, lied about the availability of rescue forces, and apparently ordered a stand down of those forces, which assured the deaths of Ambassador Stevens, and three other Americans. Oh, and as an added bonus, Clinton is now claiming the families of those murdered that evening were lying when they said Hillary blamed the attack on the YouTube video. Wow Hillary, way to stay classy.

This woman should be facing criminal charges, or at least publicly shunned; and yet, she is probably going to win the Democratic presidential nomination.