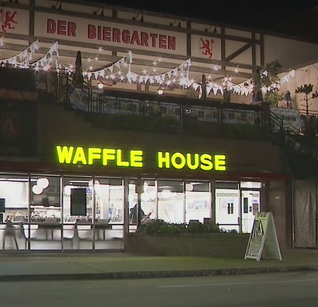 While I don’t believe I have ever been to a Waffle House, I always wanted to go. Not because of the food or the hospitality, but because there’s a good chance they will be a brawl. Or worse.

Candy Franklin (a male) claimed a Waffle House waitress pointed a gun at him after asking for cheese on his eggs. Apparently the waitress is not a fan of dairy.

Candy Franklin said an argument with a waitress over food sizzled out of control early Wednesday morning.

“It all happened over cheese eggs. At first, they didn’t bring them to me. Then they brought me normal eggs and I said that I ordered eggs with cheese on it. I tipped her and everything. It was all a normal dispute over food. I never in a million years thought it would come to gun violence,” Franklin said.

“I was looking down at my food making sure it was right and that’s when I just saw people running. I look up and she had the gun at me. I didn’t think she would shoot then she cocked it back. So, I was like maybe she is about to do something. Now, it’s time for me to turn into Rambo and get out of there,” Franklin said.

Actually Candy, Rambo would have murdered the waitress with a swizzle stick, while you ran away.