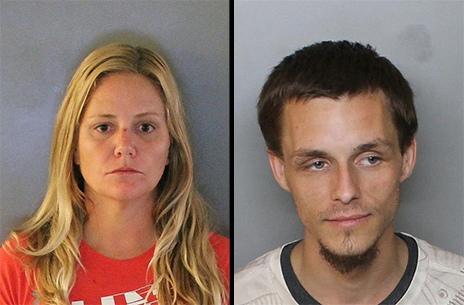 Meet Danielle Ferrero and Cody Thomas. Danielle drove from Florida to Charlotte, NC for a video visit with her criminal boyfriend. No contact was allowed, but Danielle did her best. Or worst.

According to court records, Danielle Ferrero, 38, traveled Sunday afternoon to the Charlotte County jail for an hour-long virtual visit with inmate Cody Thomas, 25. Ferrero was in the lockup’s Video Visitation Building, while Thomas was elsewhere in the facility.

This has to be a typo, because Danielle doesn’t look anywhere near 38.

During their visit, Ferrero and Thomas “frequently talked in a lewd manner speaking of sex, sexual organs and sexual activities,” according to a police report. Ferrero “frequently flaunted and rubbed her breasts, covered, showing the revealing outfit that she was wearing calling her outfit naughty.”

After Ferrero “mentioned how she repositioned herself and almost had an orgasm,” Thomas “asked Ferrero to have one for her and she began to rock back and forth in her chair, appearing to have an orgasm,” investigators allege.

Near the session’s conclusion, Ferrero exposed her breasts to Thomas, “resulting in the visitation to be cancelled by staff at the visitation center.” (H/T – Mis. Hum.)

So Danielle enters the jail’s video room, is told she cannot have contact with her white trash boyfriend, and instead, decides to diddle herself in front of the camera which is clearly monitored by the guards?

Give this woman a cigar!

Editor’s Note: We’re at an amusement park today and tomorrow, so I’ll be scarce. I may not have a full slate Wednesday, depending on how things go.