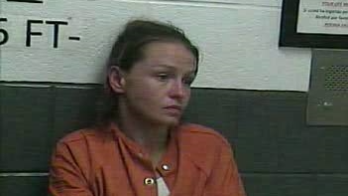 Meet Crystal Dunham of Corbin, Kentucky. Crystal got into trouble with the law after she borrowed an adult toy from her cousin and refused to give it back.

Police were dispatched late last month to a home in the city of Corbin after the occupant, Crystal Denham, called 911 to report that she had stabbed a relative.

The 33-year-old Denham told officers that Michael Barton “had come to her residence and they had gotten into an argument over a sex toy.” Specifically, Denham added, “she had borrowed it and he wanted it back.”

I’m hoping the guy wanted it back for his girlfriend, and not for him. *shudder*

Sadly, the sex toy in question is not further described in the citation, which identifies Barton as Denham’s “cousin and neighbor.”

Denham claimed that after she told Barton to get off her property, he “grabbed her by the elbow.” Denham said she then “used the kitchen knife in her hand to stab him,” but said she “didn’t think she even drew blood.”

I mean, who expects to see blood when you stab someone in the hand? Seriously Kentucky, you are making yourselves look like idiots.