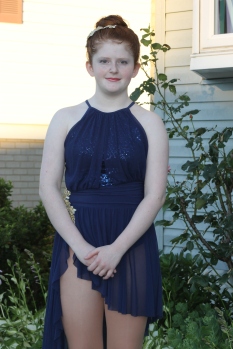 This year, Princess P decided to change her dance school. Her previous school wasn’t sure they would be open because of the Chinese Wuhan Virus, and since the owner of the new school (Dance Kidz) is friends with Mrs. Earp, it seemed like a good alternative.

Classes were an hour, once a week, and when I took Julia, she always asked to stop at the store to get her Gatorade and a snack. Since I’m a pushover, I always agreed. Julia joined the lyrical dance group, which appeared to be more like ballet than anything else.

Last night was the recital, and unlike other recitals, we were able to go home after Princess P’s dance was over. The recital began at 7pm, and considering the amount of classes, it likely went until almost 10pm. Mrs. Earp, my mother-in-law, Kevin, Erik, and I all went to see Princess P dance. (Kyle was home sick; fighting a cold the past two days.)

Obviously, I’m biased, but I think Julia performed magnificently. She told me afterward that she almost slipped at one point, and claimed she was “just okay.” I disagreed, but when Julia thinks she made a mistake, she carries it around for a day or two. I can only tell her what I saw, and I saw her dancing very well. As always, she made me very proud, and she liked her teacher enough that she is interested in taking a jazz class.

I cannot wait until I see her pulling out “jazz hands.”