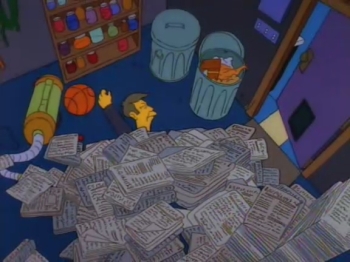 A Japanese man was killed after a six-ton pile of pornographic magazines fell on him. This is so much like my dreams it’s scary!

The man’s death was revealed by a member of the cleaning team, who said his company had been hired to remove the magazines discreetly in a way that would not be noticed by neighbours and the man’s family to save them from the shame.

He said the dead man, a 50-year-old former car maker identified only by the name Joji, had died buried underneath under a pile of the pornographic magazines.

Dude, there’s this new thing called the internet. It’s a magical place where you can’t swing a dead cat without hitting photos of naked women. And since this isn’t the 50’s, computers don’t weigh six tons.