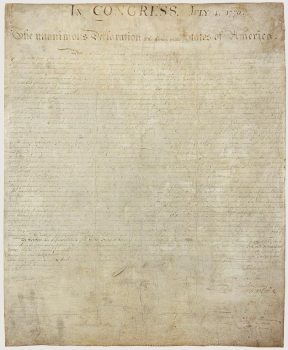 The nanny-state leftist sucklings who inhabit Facebook determined this week the Declaration of Independence violated their rules on hate speech.

The Liberty County Vindicator, a newspaper between Houston and Beaumont, had been posting the whole declaration in small daily chunks for nine days on its Facebook page in the run-up to July 4. But the 10th excerpt was not posted Monday as scheduled, and the paper said it received an automated notice saying the post “goes against our standards on hate speech.”

Part of the standard notice, Vindicator managing editor Casey Stinnett wrote, included a warning that the newspaper could lose its Facebook account, on which it depends for much of its reach, if there were more violations. The offending passage?

It was part of the “Bill of Particulars” against Britain’s King George III: “He has excited domestic insurrections amongst us, and has endeavoured to bring on the inhabitants of our frontiers, the merciless Indian Savages, whose known rule of warfare, is an undistinguished destruction of all ages, sexes and conditions.”

Mr. Stinnett noted that the newspaper wanted “a means of contacting Facebook for an explanation or a opportunity to appeal the post’s removal, but it does not appear the folks at Facebook want anyone contacting them. Or, at least, they do not make it easy.”

We hold these truths to be self-evident, that Facebook is run by merciless leftist jackasses.