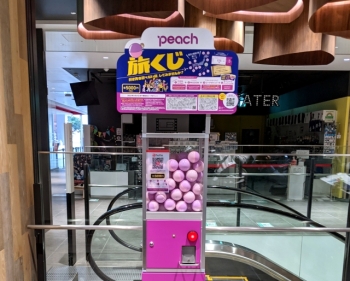 A corporation in Japan has distributed vending machines throughout airports which will give you tickets to mystery destinations for 5,000 yen, or the equivalent of $43 dollars.

With a large proportion of the population now fully vaccinated, and the months-long state of emergency finally lifted, people in Japan are beginning to book holidays again, and one budget airline has come up with a very clever idea to get people back in the skies.

Called Tabikuji (“Journey Lottery”), the new promotion is the brainchild of Peach Aviation. They’re offering return tickets from either Tokyo’s Haneda Airport or Osaka’s Kansai International, to one of a number of destinations around Japan, and while the cost is surprising, the way they’re being sold is even more of an unexpected development.

Forty-three dollars for an airline ticket is pretty sweet, even in Japan.

That’s right — the tickets are being sold from a gacha capsule vending machine, with one located in Osaka and another in Tokyo.

And because you never know exactly what you’re going to get with these machines, as the capsules are dispensed at random, that’s the way Peach is selling their airline tickets as well.

This is all well and good until you get that ticket to fabulous, sunny Detroit, Michigan.