Hey, it’s quite possible it was an umbrella stand!

Yep, that is officially hot.

Investigators subsequently located the suspect, Christina Revels-Glick, 34, at a nearby restaurant.

Good Lord, I hope she washed her hands before eating!

Revels-Glick claimed she “did not think anyone saw her because it only took her 20 seconds to orgasm.”

Twenty seconds to orgasm? So you’re saying there’s a chance!

It only took Georgia Democrats one day to turn on their new leftist senators, after Raphael Warnock and Jon Ossoff decided a $1,400 stimulus check would be preferable to a $2,000 check. Aww, that’s a shame.

Georgia Democrats have reportedly already begun fuming over their two new senators, the Rev. Raphael Warnock and Jon Ossoff, who were sworn in Wednesday by Vice President Kamala Harris.

Both men narrowly won hard-fought races against Republican incumbents in the Peach State, winning control of the Senate for the Democrats in the process. But a major issue raised by critics is that President Biden espoused a coronavirus relief plan that would send $1,400 checks to many Americans – while Warnock and Ossoff campaigned on a $2,000 promise.

“Warnock and Ossoff made it a point to endorse and exclusively say ‘$2,000 checks,’” Georgia Democrat Oscar Zaro told Mediaite. “A lot of the people in my district voted blue in the runoff for two main reasons. One: Loeffler and Perdue denying us relief during COVID while profiting millions themselves; and two, $2,000 checks.”

Hey, look at it this way, Georgia; you voted for this, and now you’re going to get it… good and hard.

A Georgia woman was arrested after seriously complaining about her McDonald’s fries.

A Garden City McDonald’s owner said [Lillian Shantel Tarver] left with her food order then came back saying her fries were cold.

The woman had a gun in her hand while she complained about the food and demanded a refund. The owner told WJCL that he opened the cash drawer and told the woman she could take whatever she wanted. The station said the woman fired a single shot at the ground before leaving the restaurant.

While I’m not a fan of McDonald’s, their fries rare amazeballs. I wouldn’t be happy if they were packed in the bag cold, but I also wouldn’t come back with a gun. Cold waffle fries from Chick-Fil-A? Maybe.

Meet Erica Thomas (left), a Democrat Georgia state legislator. Erica took to Twitter, the garbage tier of social media, to claim a racist white male told her to “go back where she came from” after a supermarket dispute.

On Friday, Erica Thomas, a Democrat, alleged that a “white man” called her a “lazy son of a b*tch” and told her to “go back” to where she came.

“Today I was verbally assaulted in the grocery store by a white man who told me I was a lazy SOB and to go back to where I came from bc I had to many items in the express lane,” Thomas said in a Friday tweet. “My husband wasn’t there to defend me because he is on Active Duty serving the country I came from USA!”

Well that seems legit, because no Democrat has ever lied about being assaulted, verbally or physically, by a white guy. Oh wait…

On Sunday, Eric Sparkes stepped forwarded and claimed he was the man that Thomas was referring to in the grocery store. He denied ever making any racially charged insults towards Thomas and said he only called her a “lazy b*itch” because she had too many items in the express checkout lane.

Not for nothing, but bringing too many items in an express line should be a capital offense.

Sparkes told reporters that he is a Democrat and a Hispanic American who vehemently opposes President Trump. He added that Thomas was only doing this to help further her political career.

Funny how all these Trump-supporting bigots are always Democrats.

I’m no detective, but if I were to make an educated guess, Erica lied about the story because she thought 1. the media would run with it, no questions asked, and 2. she never thought the “racist” white guy would defend himself.

While Hollywood has-been activists are spending their ample free time boycotting Georgia for its “Heartbeat Law,” an American film icon has decided to tell his contemporaries, “LOL, get f**ked.”

Despite the boycott of filming in Georgia launched by Hollywood liberals angry over the state’s new pro-life “Heartbeat” law, legendary actor/director Clint Eastwood will be making his latest movie, “The Battle of Richard Jewell,” in Atlanta this summer.

“Clint Eastwood will perform new film in Georgia despite abortion bill boycott,” tweeted NBC Charlotte on June 25. The movie is about Richard Jewell, a police officer and security guard who discovered a bomb at the 1996 Summer Olympics in Atlanta, Ga., and saved countless lives. Jewell was initially hailed as a hero and then was viewed as a suspect.

Eastwood is an amazing actor, but he is arguably a better director. He is not going to tell Richard Jewell’s story in a neighboring state just to satisfy the likes of Alyssa Milano and Marvel actors. Clint doesn’t give a f**k about what other people think, and it’s why he’s remained on top of the heap for decades. 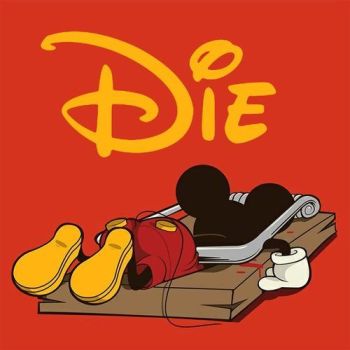 Like many families, Mrs. Earp and I have made a few trips to Disney World in Florida. Not just with the kids, mind you; we went there on our honeymoon and when Mrs. Earp was pregnant with Kyle. It’s always a fun time, but honestly, I don’t think we’ll be spending our money there anymore.

In an interview with Reuters, the CEO of the Walt Disney Co. said he had doubts the company would continue production in Georgia if the controversial ban on abortion in the state comes into effect, primarily as the company’s employees would be against it.

“I think many people who work for us will not want to work there, and we will have to heed their wishes in that regard. Right now we are watching it very carefully,” Iger said. The exec added that if the law does come into effect, he didn’t “see how it’s practical for us to continue to shoot there.”

Funny, because I don’t think it’s practical for my family to continue patronizing anything Disney from here on out. And no, I have not been under a rock; I realize the entire corporation is filled with leftists who hate conservatives. I should be thanking Iger for helping make my choice for me.

On May 7, Georgia’s Republican Gov. Brian Kemp signed the “fetal-heartbeat bill,” which bans abortion as early as six weeks into pregnancy. The legislation, as well as similar moves in Alabama and other states to ban abortion, has caused a furious backlash in Hollywood and led to calls to boycott those states.

Disney, through Iger, is the latest company to wade into the controversy. Earlier this week, Netflix said it would fight Georgia’s abortion law and would “rethink” its operations there should the law go into effect.

Netflix? Is that still a (profitable) thing? I am proud to say I have never spent a dime on Netflix and never had the displeasure of watching its programming. Of course, I should thank them as well for all the money I’ll save in the future.

A woman turned her van into a submarine this week after an insect fell into her lap. No word on whether the woman’s lawyer will sue the offending arachnid.

The woman told a state trooper she was trying to back her Kia van down the Neel’s Landing Boat Launch to put her kayak in the river when a spider jumped in her lap. Naturally, she jumped out of the van. The van then rolled into the river, the Georgia State Patrol said.

The agency sent a trooper to the boat launch in the western part of Bartow County near Kingston. By the time the trooper arrived, the van had long slipped out of sight.

“She stated that it floated downstream a few feet,” a GSP spokesman said. “And within seconds, it was totally submerged. A passerby in a boat attempted to locate the van, but without success.”

The good news is the woman finally got her seat cushions washed. The bad news is the shag carpet will never be the same.

Meet Reality Winner. (Yes, that is her real name.) This stupid twat was just hit with the reality that she will be the winner of the Treason Sweepstakes. The grand prize is – hopefully – an evening in front of a firing squad.

A criminal complaint was filed in the Southern District of Georgia today charging Reality Leigh Winner, 25, a federal contractor from Augusta, Georgia, with removing classified material from a government facility and mailing it to a news outlet, in violation of 18 U.S.C. Section 793(e).

Winner was arrested by the FBI at her home on Saturday, June 3, and appeared in federal court in Augusta this afternoon.

Winner should be charged with treason, and spend the rest of her miserable life in federal pound-you-in-the-ass prison.

Oh, and by the way, this pig is a Bernie Sanders supporter and a part of the so-called “resistance” to President Trump. I sincerely hope the president doesn’t resist the urge to recommend a death sentence for this piece of garbage.

A Georgia man carried out a different kind of terror attack at his local Waffle House last week.

Bashir Rasheed, 36, was arrested after he drove his BMW to a Waffle House in Sandy Springs, got out of the car and tried to enter the restaurant sans clothes.

Witnesses told police that Rasheed began stroking his penis after exiting his car and walked up to the entrance where he allegedly pressed his sex organ against the glass entry door.

In fairness, the penis was just trying to place an order for scrambled eggs.

Officers said the suspect grabbed himself and began to urinate while they were still talking, according to the arrest report.

Oh please, who among us has not used our Kielbasa of Mass Destruction in public? Let him who is without sin among you be the first to throw a cup of pee.

Walt Disney and Marvel have threatened to boycott the state of Georgia in response to the state’s proposed religious freedom bill, because liberals only believe in freedom from religion.

Walt Disney and Marvel, a Disney subsidiary, are threatening to boycott Georgia if Governor Nathan Deal signs into law a religious freedom bill that recently passed the Georgia state legislature.

The bill, HB 575, was initially designed to protect businesses and non-profits whose owners had religious objections to providing services for and participating in gay “marriages”; however, the new version is less accommodating to religious freedom.

So the governor already backed down to the libtards, but that wasn’t enough for Disney and Marvel, because any religious objections solely made by Christians is racist and bigoted.

Even this watered-down version of the bill, however, has caused Disney, and with it the Georgia-based Marvel studios, to threaten a boycott of the state should Governor Deal sign it.

“Disney and Marvel are inclusive companies, and although we have had great experiences filming in Georgia, we will plan to take our business elsewhere should any legislation allowing discriminatory practices be signed into state law,” a spokesman for Burbank-based Disney said. (H/T – AOSHQ)

This from the company which fired 250 American employees after forcing them to train their foreign replacements. Ace at Ace of Spades has been urging conservatives to ban Disney and Marvel for a long time, but I always hesitated because my kids and I like Marvel films. I think it’s high time I change my stance, though, because far too many liberal organizations pull crap like this. I think I should start punishing Disney and Marvel in the wallet.