Remember yesterday’s F. Joe Biden post when I wrote, “Prepare yourselves for more of this, because it’s coming.” Wow, was that prescient.

Governor Ron DeSantis, the greatest governor in American history, has planned to import medications from Canada, which are cheaper there than in America. It’s a great idea which could help millions of Floridians, but F. Joe Biden is blocking the plan out of spite.

The governor’s office said it has been waiting 630 days for approval from the Food and Drug Administration for its proposal to import cheap, safe medications from Canada.

You do realize this is being held back because DeSantis is a conservative, right?

“Florida has been ready to deliver cheaper prescription drugs to those that need them for nearly two years,” the Republican said. “The lack of transparency by the Biden administration during the approval process, and failure to provide records on the importation proposal, is costing Floridians who are facing rising prices across the board due to inflation.”

It’s likely incompetence and partisanship. From his first day in office, F. Joe Biden has done all he can to hinder conservatives, especially Governor DeSantis.

Importing prescription drugs from Canada, where they are generally cheaper, is a great, pro-market way to make healthcare more affordable. Only Big Pharma and its lackeys really oppose this because it undercuts their bottom line by increasing competition. They say it’s “unsafe,” but come on — we’re talking about Canada, not Somalia. Aside from those with crony interests at play, most can see why this is a commonsense move.

Even Sen. Bernie Sanders (I-VT), of all people, has praised DeSantis’s effort, calling it “great.”

Bernie Freakin’ Sanders said this was a great idea, and yet, it will go nowhere because this piece of garbage will not allow Americans to get cheaper medications.

Thanks to The Pirate’s Cove for the generous link. 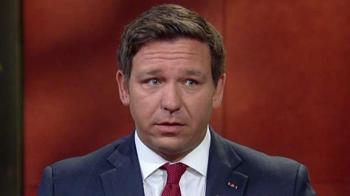 Useless political douchebag, and destroyer of California, Gavin Newsom took a shot right to the face after it was revealed his in-laws donated a $5,000 contribution to Florida Governor Ron DeSantis’ campaign.

Democratic California Gov. Gavin Newsom has been a vocal critic of Florida Gov. Ron DeSantis, in recent weeks, but Newsom’s in-laws seem to approve of the popular Republican.

According to contribution records on the Friends of Ron DeSantis PAC website, the Siebel Family Revocable Trust made a $5,000 contribution on April 6, 2022. That trust is run by Kenneth F. Siebel Jr. and Judith A. Siebel, the parents of Newsom’s wife, Jennifer Siebel, records obtained by Fox News Digital show.

This. Is. High-larious. I’m sure the in-laws throw some green towards their jackass son-in-law, but the fact they donated to DeSantis warms my cockles.

And to think Newsom believes he can be a legitimate presidential candidate in 2024.

Florida Governor Ron DeSantis signed a bill which will birth a state police force to investigate election fraud in their state. The bill will also make ballot harvesting a third-degree felony, with possible jail time for offenders.

It also revises the frequency with which election officials must maintain voter registration lists – specifically culling deceased individuals – and increases the penalty for ballot harvesting by making it a third-degree felony, punishable by up to five years in prison.

I mean, I’m not gay, but I absolutely love this man.

“Twenty years ago, nobody thought Florida was a prime example of how to conduct elections, but we have become a national leader by running the most secure elections in the country,” DeSantis celebrated.

While this legislation is more than necessary – especially after the fraud during the 2020 election – the sad part is DeSantis is probably the only governor in America with the stones to put forth such a bill.

If Donald Trump runs for president in 2024, he will absolutely get my vote. That said, if Florida Governor Ron DeSantis runs in 2028, I will crawl naked through broken glass to vote for him. DeSantis is simply the greatest governor on America.

According to the Washington Examiner, the downfall of Disney has been $46.6 billion USD since March 1, which the outlet marks as shortly before the start of their ongoing conflict against the state of Florida.

The latest battle has Disney losing their special self-governing status. Tens of billions of dollars were wiped out of Disney’s stock value since Tuesday, alone. Coincidentally, that was the same day DeSantis announced that eliminating Disney’s “legacy special district” status was on the session agenda.

Now on Friday, DeSantis signed a bill that made it official. By June 1, 2023, Disney is no longer allowed to do their own zoning, laws, policing, or infrastructure.

“You’re a corporation based in Burbank, California, and you’re gonna marshal your economic might to attack the parents of my state. We view that as a provocation, and we’re going to fight back against that,” he commented.

Governor DeSantis is an amazing conservative and he does not suffer fools. As Abraham Lincoln said about General U.S. Grant, “I can’t spare this man—he fights.”

Florida Governor Ron DeSantis is preparing to ship the illegal immigrants F. Joe Biden foisted upon him out of Florida, and is planning to send them to blue states, like Biden’s home state of Delaware.

Florida Republican Governor Ron DeSantis is planning on transporting any illegal immigrants sent to Florida by the Biden administration out of the state.

According to Newsmax, a spokesperson for DeSantis’ office stated that the transportation for migrants who entered the US illegally out of Florida was included in the governor’s recent budget recommendations. Additionally, the state Legislature’s proposed budget includes $12 million for the Florida Department of Transportation to remove illegal immigrants from the state and relocate them.

Say what you will about “Florida Man,” their politicians are top-notch.

According to the spokesperson, ”…the legislature delivered on this priority, along with many of the governor’s other priorities to protect Floridians from the harmful impacts of the Biden border crisis.”

DeSantis has proposed sending the migrants to Delaware or Martha’s Vineyard. However, the governor’s office said that sending them to ”…other ‘progressive’ states whose governors endorse blatant violations of federal immigration law” is also an option.

DeSantis isn’t the only one doing this. Texas Governor Greg Abbott dropped off its first busload of illegals a few blocks from the Capitol on Tuesday. 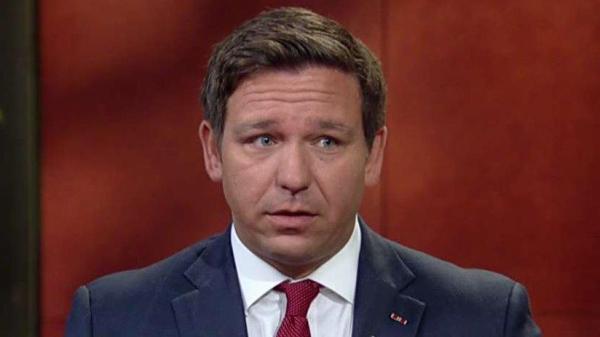 Florida Governor Ron DeSantis – arguably the greatest Republican politician in America – has received $109 million from contributors and donors. I almost feel badly for his opponent, who will likely be destroyed in a rout.

In Florida, Gov. Ron DeSantis is the No. 1 fundraiser in state politics in the 2022 election cycle so far.

DeSantis is a Republican who first assumed office in 2019.

Since I believe President Trump will run in 2024, DeSantis can spend four more years as governor, then jump right into the presidential race in 2028. He’s certainly young enough, and would be a fantastic president. Plus, his wife is crazy stupid hot.

You see that alligator on the left? Looks menacing, right? In reality that gator isn’t half the man Florida Governor Ron DeSantis is; he’s a savage, especially when it comes to protecting his state from lawless presidents.

Florida Governor Ron DeSantis (R) unloaded on Democrat President Joe Biden during a press conference on Thursday over reports that the Biden administration has used contractors to fly dozens of planes into the state of Florida carrying illegal aliens.

DeSantis’ remarks come after an illegal alien who posed as a minor, but was really in his early twenties, illegally entered the U.S. at the southern border. It’s not clear how he arrived in Florida, but once there, he allegedly murdered a father-of-four.

Biden has been sending clandestine flights into states – many of them red states – without notifying the governors beforehand. You know why this is being done, right? It’s being done to turn these red states purple, if not blue.

DeSantis said that the flights started back in May and that Florida law enforcement agencies are engaged on the matter. DeSantis said that he would like to put the illegal aliens that Biden drops into Florida on buses and ship them to Biden’s home state of Delaware.

“You know, my view would be, why don’t we, if they’re going to come here, you know, we’ll provide buses,” DeSantis said, “I will send them to Delaware and do that. I mean, if he’s not going to support the border being secured, then he should be able to have everyone there. So, we will do whatever we can in that regard. And we are absolutely going to do everything we can.”

If the “president” can ship illegals to other states, surely governors can re-ship illegals to states which would welcome them. F. Joe Biden welcomes illegals into America, so obviously the people of Delaware are anxiously ready to embrace them, too.

Florida Governor Ron DeSantis is arguably the greatest politician in the union. The man exudes common sense, fights back against the woke mobs, and just signed a bill making alcohol to-go the law of the land.

Governor Ron DeSantis signed a bill into law on Thursday that makes to go alcohol permanent in the state of Florida.

Senate Bill 148, known as the beverage law, allows certain restaurants and other businesses to sell or deliver to-go alcohol under certain circumstances.

The law also requires the to-go drinks to be packed in a container and sealed by the licensee or its employee. The drink must then be placed in a bag or other container that’s secured in a way that would show if it was opened or tampered with. The container must also have a dated receipt for the drink and food attached to it.

To-go drinks that are delivered or transported in a vehicle must be placed in a locked compartment, locked trunk, or another area behind the last upright seat of the vehicle.

The last two paragraphs are pretty lame – if you cannot trust adults to transport alcohol, maybe you need to rethink the law – but otherwise this is a good idea.

Meet Anthony Steven Guevara of Collier County, Florida. Anthony is big on politics; so much so that he tried to change Governor Ron DeSantis’ voter registration. My boy’s wicked smaht!

Agents with the Florida Department of Law Enforcement arrested Anthony Steven Guevara on charges of unauthorized access of a computer and altering a voter registration without consent.

According to the FDLE, agents started the investigation after DeSantis went to early vote on Monday and was told his address had changed to one in West Palm Beach in the database. According to Gubernatorial Communications Director Fred Piccolo, DeSantis provided identification and was allowed to early vote. The Department of Law Enforcement was notified and traced the activity now being described as identity theft to the 20-year-old Naples man.

Agents were able to identify Guevara as the suspect and arrested him at his home with help from the Collier County Sheriff’s Office. (H/T – Mike AKA Proof)

Wow, how did the police find this master of disguise, what with his My First Beard Kit by Kenner.