On Saturday night, the boys and I had the distinct pleasure of seeing a Baltimore Orioles game. We’ve been trying to attend at least one game a year – Covid screwed us out of last year’s game – because we’re big O’s fans, and because Camden Yards is one of the best stadiums in baseball.

It also didn’t hurt that there was a bobblehead giveaway (left).

I was apprehensive on the ride down I-95 because there was rain in the forecast. We’ve been lucky in Baltimore with the weather, and while is did eventually rain, it was not hard enough – phrasing – to stop the game. Our seats were in left field, and we had cover from the bleachers above. The seats were pretty great, considering… 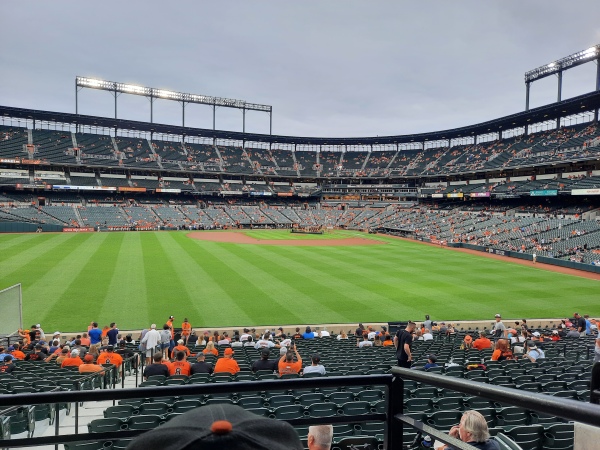 The bobbleheads were for fans 15 years and older – which I thought was a dumb idea, so when Kevin got screwed out of one, I gave him mine.

The workers at the gate actually asked how old the kids were, and I was honest about Kevin. Moments later, Kyle and Erik both trashed me. “You should have said he was fifteen, idiot!” They were probably right, but the kids each got a bobblehead, so that’s all that mattered.

The game was great for the first three innings. The Orioles were playing well, and leading the Tampa Bay Rays for a while. Tamps made it 5-3, and the middle innings were fairly uneventful. Late in the game, Tampa hit a grand slam, then another solo homer. The final score was 12-3. Aargh!

While walking to the car, the kids said I lost my game choice privileges. We saw Tampa last time and it was also a rout. Kyle, Erik, and Kevin said I cannot pick the opponent anymore, and Kyle said we’ll find the worst possible team to see next year.

Eh, it was still a good game, and it’s always great going to Camden Yards. The nearly three-hour ride home was tiring, but the experience was totally worth it.