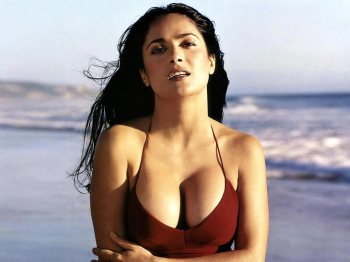 Weinstein, for his part, denies all the charges.

A spokesperson for Harvey Weinstein has released a statement about Salma Hayek’s allegations against the disgraced producer.

On Wednesday, the Oscar-nominated actress published an essay in The New York Times about her experience working with Weinstein on the 2002 film Frida. Hayek does not just allege that he sexually propositioned her numerous times—she also alleges that Weinstein constantly berated her over the course of making the film, physically dragged her at a party, threatened to kill her, and forced her to do a full-frontal nude sex scene.

In the statement, Weinstein denies “pressuring Salma to do a gratuitous sex scene with a female co-star.” In addition, he denies claims of sexual misconduct.

All these allegations are despicable – save for the full-frontal nude scene. Oh, sorry.

I have no problem with Weinstein denying the charges. If he believes all these women remember things incorrectly, fine. That said, Weinstein believes he is still a Hollywood icon with all the perks and privileges afforded his former status. Dude has a rude wake-up call coming. Soon.

Jimmy Kimmel, unfortunately, still has a late-night “variety show,” but that assignment is being put on the back burner thanks to Jimmy’s real job – social justice warmongering. The good news is no one cares about his insipid political posturing. The bad news is, like most of Hollywood, Jimmy is a hypocrite.

After he spoke out so forcefully on both health care and gun control over the past month, many late-night viewers might have expected Jimmy Kimmel do the same about the sexual harassment and assault allegations against Harvey Weinstein….

“First of all, the Harvey Weinstein thing, people like this false equivalence of that’s somehow equivalent to what happened in Las Vegas,” Kimmel added, arguing that the alleged assault of dozens of women does not deserve the same reaction as the killing of nearly 60 people. He said that Weinstein is “not a friend of mine,” adding, “I’m not in the movie business.” As a once and future Oscar host who is friends with many of the movie stars in Weinstein’s orbit, that claim is a hard one to buy.

No, the media and your leftist buddies called you that, and you reveled in the spotlight. Now one of your own is being investigated for sexual assault, and suddenly you have writer’s block? Interesting.

(Sorry about the sub-par posts lately, but the past few days have been riddled with exhaustion, work stress, and potential medical issues. I should be back to my former sarcastic self soon.)

Infamous Hollywood producer Harvey Weinstein has been accused of sexual harassment by dozens of alleged victims. In response, many Democrat fanboys and girls have distanced themselves from the pervert, with the exception of two notable politicians.

But former Democratic Presidents Barack Obama and Bill Clinton, as well as former Secretary of State Hillary Clinton — all of whom have longstanding ties to Weinstein, a major Democratic Party fundraiser — have not publicly addressed the accusations.

Representatives for the Clintons have not responded to comment for this story, and Obama’s office declined to comment.

Well, in fairness, the Obamas and Clintons already received their millions from Weinstein, so it would be rude to disavow him publicly.

Imagine CNN’s uproar if Weinstein was a huge Republican donor and President Trump refused to disavow him. It would be the top story on every media outlet on Earth. Weinstein is a huge Democrat donor, and it took days for most media outlets to even acknowledge the story, let alone report on it.