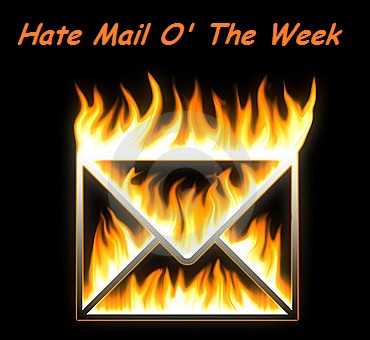 It’s been a long time since I had some post-worthy hate mail, but this one is definitely worthy of your consideration.

This one comes from Las Vegas troll “Your Worst Nightmare,” which I guess is supposed to frighten me, and it would if this person was the incarnation of my actual worst nightmare: Hillary Clinton doing naked jumping jacks on my table while I’m enjoying Thanksgiving dinner.

Nightmare took umbrage with last week’s naked clown woman post, and he/she volunteered to school us all on the intricacies of modern manners. His post is below, featured in all its unedited glory.

You are an idiot! Do you know the true story or just going by the lies in this garbage article? The people who put others down are the ones who need to look in the mirror themselves you ugly pice of a nut sack flake. Get a real life!!

Just as an aside, Nut Sack Flakes are my favorite breakfast cereal. I cannot begin my day without them.

As for Nightmare, I’d like to address his rant, point by point. As far as my idiocy is concerned… guilty. I was an average student in college, and have the mental acuity of bread mold. That said, Nightmare spent his time and energy writing an angry comment on a blog he never heard of about a post no one cares about. But yes, I’m the idiot.

Nightmare then asks if I know the “true” story. The only story I know is the one reported by the local media, dispensed to them by the police department who arrested the clown. The incident occurred in Tennessee, and Nightmare’s IP address comes back to Las Vegas. I guess he was an (eagle) eyewitness.

Nightmare hits the trifecta at the end of his whiskey-induced tirade by lecturing us about putting down others… immediately before calling me an “ugly pice of nut sack flake.” Apparently self-awareness is not an instinct he possesses, and ironically, his spelling is also a nightmare.