Huma Abedin, the political aide and “longtime companion” of Hillary Clinton, has welcomed her estranged husband, Anthony Weiner back into their home.

That’s right people, the big Dick is back!

The former Democratic congressman from New York, who recently completed a stint in prison for sexting with a 15-year-old girl, is getting another chance with his wifey Huma Abedin, a longtime aide of Hillary Clinton.

The Daily Mail first reported the news Monday that Weiner — a “disgraced politician” — was spotted moving back into the couple’s abode over the weekend.

Weiner left a halfway house in the Bronx where the registered Level 1 sex offender bided his time as a segue between prison and the real life. The twice-New York City mayoral failure was sentenced to 21 months for his crime. Authorities let him out of the jug early for good behavior.

Weiner was on good behavior because he wasn’t allowed to contact underage girls in prison. That said, I guarantee he’ll be sexting young girls before day’s end.

In a startling example of corruption, Huma Abedin – Hillary Clinton’s closest adviser – facilitated access to the former Secretary of State in exchange for “donations” to the Clinton Foundation.

The Abedin emails reveal that the longtime Clinton aide apparently served as a conduit between Clinton Foundation donors and Hillary Clinton while Clinton served as secretary of state. In more than a dozen email exchanges, Abedin provided expedited, direct access to Clinton for donors who had contributed from $25,000 to $10 million to the Clinton Foundation.

Oh,, and speaking of Huma, it was just revealed she was assistant editor of the Journal of Muslim Minority Affairs, a radical Muslim publication that opposed women’s rights and blamed the US for 9/11. But yes, let’s sweep this woman and her elderly lesbian girlfriend into the White House. 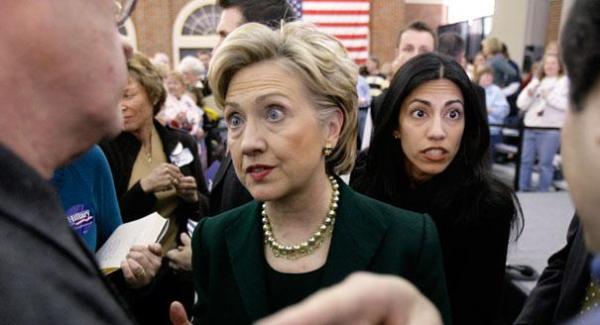 Huma Abedin told a FOIA commission Hillary Clinton routinely burned her State Department schedules; an admission, if true, would be yet another violation of federal law.

Hillary Clinton’s closest aide revealed in a deposition her boss destroyed at least some of her schedules as secretary of state — a revelation that could complicate matters for the presumptive Democratic nominee, who, along with the State Department she ran, is facing numerous lawsuits seeking those public records.

“If there was a schedule that was created that was her Secretary of State daily schedule, and a copy of that was then put in the burn bag, that . . . that certainly happened on . . . on more than one occasion,” Abedin told lawyers representing Judicial Watch, the conservative organization behind the emails lawsuit.

Alleged felony after alleged felony, and yet, not one Democratic politician has called on Clinton to drop out of the presidential race. Not one.