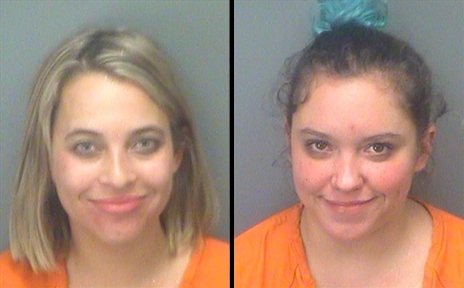 Meet Sarah Franks and Kaitlin O’Donovan of Clearwater, Flori-Duh. These two rocket surgeons were arrested after they both came to a man’s home, threw glitter at him, entered his residence, and smashed the man’s window. So, in short, just another day in Florida.

Investigators say Sarah Franks, 29, and Kaitlin O’Donovan, 27, arrived early yesterday morning at the Clearwater residence of Jacob Colon and began arguing with him while he was standing on his fenced balcony.

Franks and Donovan, cops allege, each threw a container of glitter at Colon, who was struck “in the upper torso and head.” Arrest affidavits do not reveal the nature of the argument or the relationship between the parties.

Now, I’m no detective, but I’d wager dollars to donuts Colon was banging them both and they found out.

After pelting Colon, Franks climbed over the ground level fence and entered Colon’s apartment, where she “engaged the victim again by throwing more containers of glitter at him,” cops charge. Franks then allegedly unlocked the front door to allow O’Donovan to enter the residence.

Once inside, O’Donovan threw additional containers of glitter at Colon, which indicate that O’Donovan and Franks share an apartment about two miles from Colon’s home. Upon completing the glitter bombing, Franks kicked a window in Colon’s residence until it broke. The pair then drove away. (H/T – Mis. Hum. at AOSHQ)

When I was younger, I was never savvy enough – or handsome enough – to be sleeping with two roommates, but apparently Jacob Colon has the Midas touch. Also, if I had to make a decision, it would definitely be Sarah Franks (on the left).