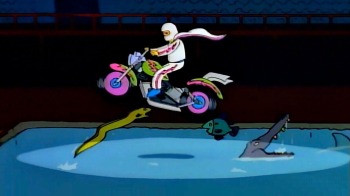 A motorcyclist had arguably the worst day of all time after he lost control of his motorcycle while driving through Kansas City, Kansas.

Police responded to reports of an injury crash in the area of 12th Street and Kansas Avenue, according to the Kansas City, Kansas Police Department.

After investigating, officers found out that a man had been racing his bike when he lost control and wrecked. When he hit the ground, a gun that he had in the waistband of his pants fired, striking him in the hip.

The man was also then struck by another vehicle. The driver fled the scene.

Police discovered that the man was also a felon. When searching his motorcycle, they found a large bag of suspected methamphetamine.

The good news is the man is expected to survive, even if his will to live does not.

A Kansas City man died after launching fireworks in celebration of the Chiefs Super Bowl victory.

Police say the man tried to light commercial-grade fireworks inside a mortar shell when one of them exploded.

It happened shortly after the Chiefs defeated San Francisco 31-20.

Police say officers also will be following up on 163 reports of celebratory gunfire from 5:30 p.m. Sunday to early Monday.

I never understood the rationale for rioting, firing gunshots into the air, and lighting fireworks simply because “your team” won a championship. Celebrate, cheer, and scream a bit, but dude, get a grip; you aren’t actually on the team.

Oh, and for those Never Trumpers out there, the article does not mention whether this incident occurred in Kansas City, Missouri, or Kansas City, Kansas.