A naked man was found in Lancaster County (PA) sitting along the side of the road eating grass. I now completely understand why the Amish have isolated themselves from the local population.

A naked man was found along Route 72 in Penn Township eating flowers and grass on Sunday morning.

Police were dispatched to the scene after a call reporting a naked man gardening.

Officers located the man who appeared to be in his mid-thirties, covered in feces and eating grass and leaves. (H/T – Mis. Hum.)

I mean, I can understand being covered in feces – believe me – but eating leaves, grass, and flowers? Dude, Woodstock ended fifty-one years ago. Lousy naked hippies.

A Lancaster, Pennsylvania judge has set bail at $1 million for the thugs who rioted after the death of Ricardo Munoz. You may remember Munoz, who charged at a Lancaster police officer with a butcher knife. The officer, rightly, shot Munoz, killing him. These are the “heroes” of the Left.

Several individuals accused of rioting in Lancaster, Pennsylvania, after the police shooting of Ricardo Munoz have had their bail set at $1 million. Of the nine who were given that bail amount, none were able to post it.

That’s a shame. Lancaster has become a shithole, but the surrounding area is Amish country, and they don’t f**k around when it comes to rioting.

Twelve adults have been charged with criminal conspiracy for arson, riot, institutional vandalism, failure to disperse, obstructing highways and other public passages, disorderly conduct, and defiant trespass. Nine of them had their bails set at $1 million. One of the 12 faced an additional charge of illegal possession of a firearm. At least eight of those charged are not Lancaster residents.

One 16-year-old has been charged with riot, disorderly conduct, possession of instruments of crime, possession of a small amount of marijuana, propulsion of missiles onto a roadway, and institutional vandalism.

Wow, George Soros must pay pretty well to get teenagers to go to prison for him. 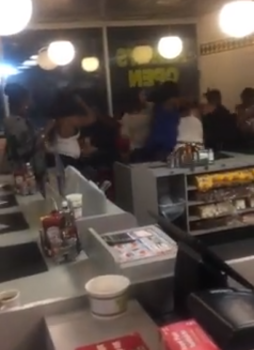 Lancaster, Pennsylvania is a quaint little city whose claim to fame is milk, pretzels, and the Amish. Like most rural towns, Lancaster has a kickass Waffle House… and by that I mean you can get your ass kicked there.

The brawl Sunday at the restaurant in Lancaster pitted members of one family against three other women. In addition to hair pulling and haymakers, some of the suspects threw utensils and other items snatched off tables. Manheim Township police collared the quintet of brawlers for disorderly conduct, a misdemeanor.

Cops identified the defendants as Deborah Shivers, 56; Tyneisha Shivers, 37; Latonia Shivers, 31; and Mercedes Shivers, 25, (each of whom lives in nearby Reading). The fifth woman, Tonisha Shivers, 37, resides in Dallas, Texas.

This family obviously had a few bones to pick, but I’m sure they will eventually iron out their problems.