So I mentioned Parents Weekend earlier, and while it was amazing – God Bless Texas – the flight home was less than amazing.

We were booked on Southwest – easily our favorite airline – and I did not want the window seat this time. Mrs. Earp took the middle and I had the aisle, because my bladder is smaller than a lima bean. Everything was going smoothly, and there was a chance we wouldn’t have to share the row with another humanoid.

A woman carrying a small tote bag walked up the aisle and wanted to sit in the row next to us. The women there said something about not liking dogs, or being allergic to dogs, and basically told the woman to scream. I heard a bit of the conversation, and thought, “Did she say dog?” Moments later, the woman asks if she can have our window seat. I’m not going to say no – although I thought it – so she sat down. Inside this makeshift tote bag was a small white dog, poking its nose out of the carry-on.

This yippy little bastard did not seem to be a service dog, so… what the hell?

Strangely enough, the dog was the least annoying part of the flight…

END_OF_DOCUMENT_TOKEN_TO_BE_REPLACED

We arrived in Dallas on Friday at about 2:30pm, picked up out luggage – Love Field is crazy efficient, and it’s usually a breeze getting baggage quickly. We hopped the tram to the rental car place, received out VW Jetta – a really nice car – and headed to the hotel. Naturally, since I was involved, there was a snafu at the hotel which cost us another hour, and after calling Kyle, he said to take our time, as he was finishing a paper for class.

We finally arrived on campus at around 5pm, meet Kyle, and asked if he wanted to have dinner at school. (The dinner we paid for.) He looked at us and said, “I really don’t want to be on campus right now. I haven’t slept much this week, and I need to get away.” Okay, done.

He took us to Slim Chickens, a nice fast food place whose chicken is pretty fantastic. Kyle said he still loves Texas, loves his lacrosse team, and the work load is becoming more manageable. We sat talking for a while, and after dinner, went back to his residence hall. We even hit the lacrosse field and shot on the nets before the rain came. The missus and I headed out around 9pm and said we’d be on campus early Saturday morning…

END_OF_DOCUMENT_TOKEN_TO_BE_REPLACED 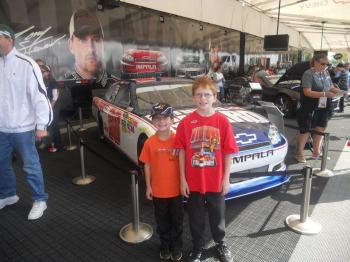 Mrs. Earp is on Facebook, and she posted this photo of Erik and Kyle at Dover International Speedway in 2011. Erik was 7 and Kyle was 10. It popped up Wednesday on one of those flashbacks, so she sent it to me.

I posted this because I’ll be scarce the next few days. Mrs. Earp and I will be headed to fabulous sunny Texas for the University of Dallas’ Parents Weekend.

I literally cannot wait to land in Dallas – our plane leaves at noon – and it’s quite possible I may stay there, quit my job over the phone, and abandon my house.

Unlike our recruiting visit a year ago, I’m leaving the laptop home, and while I’ll have posts set up for the weekend, I won’t be on much. Between the festivities and the kids’ demand for Texas souvenirs, we’ll be rather busy.

So enjoy your weekend – I know I will – and I’ll be back live Monday. God bless Texas!