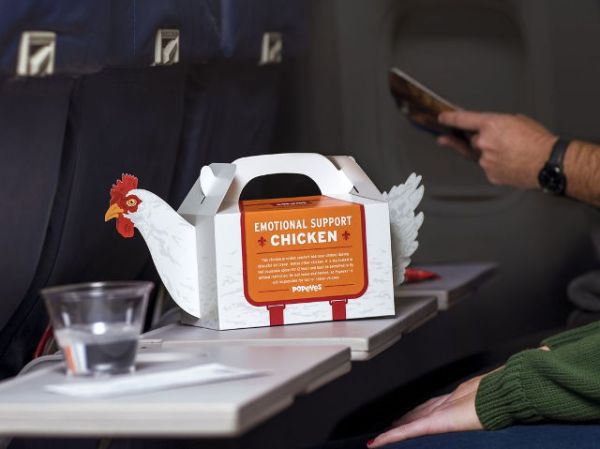 A riot broke out in a Houston-area Popeye’s restaurant this week, all because the location ran out of chicken sammiches. No offense. TXNick, but I may be rethinking my move to the Lone Star State.

Among the hungry mob were two women and three men, who reportedly stopped at the drive-thru in southeast Houston on Scott Street and Corder just after 9pm Monday. But the routine transaction quickly took a dramatic turn when the employee at the window told them their supplies of the new and infamous Popeyes chicken sandwich had run dry.

In response, all five of the currently unidentified suspects tried to force their way inside the restaurant, with one of the men even pulling out a gun refusing to take no for an answer.

Throughout the ordeal, the group left a baby unattended in the back seat of their blue SUV.

Well, at least the parents’ priorities are in order.

I’ve had Popeye’s before, and it’s pretty good, That said, Kyle was recently at a Raising Cane’s restaurant, and he claims it’s the best fast food chicken he has ever tasted.

In a not-so-veiled shot at emotional millennials, Popeye’s restaurants are selling “Emotional Support Chicken” for travelers in the Philadelphia International Airport.

This is a shot of one of the limited edition Emotional Support Chicken boxes available from the Popeyes in terminal C of the Philadelphia International Airport. Some more info while I go grab myself some emotional support donuts and chocolate milk:

Starting Tuesday and for a limited time, travelers passing through Terminal C of Philadelphia International Airport can purchase the high-flying fowl – a fried chicken meal in a specially designed, chicken-themed carrier box, perfect for taking onto the next flight.

“We know holiday travel can be frustrating, and there’s no better way to ease stress than with a box of delicious Popeyes fried chicken and a good laugh,” said Hope Diaz, the company’s chief marketing officer. At $8.49, the Emotional Support Chicken tenders meal is the same price as its earth-bound kin.

That’s pretty ingenious, and considering the food in PIA is usually somewhere south of horrendous, at least Popeye’s isn’t terrible. I mean, it’s no Chick-Fil-A, but what is?