Joseph works hard, and he plays hard, especially on the weekends. He enjoys, skiing, lazy days at the beach, and robbing stores with unicorns.

A Bel Air man is one of two suspects charged in the armed robbery of a High’s store in Baltimore County over the weekend. Police said the Harford County man was the getaway driver, and his accomplice robbed the convenience store while wearing a full-body unicorn costume.

Police said Jacob William Rogge, 28, of the 7900 block of Bradshaw Road in Upper Falls, was clad in a full-body white and pink unicorn costume when he entered the convenience store, smashed a register with a crowbar and demanded money from an employee.

Judging by Joseph’s mug shot, you’d think he would be the one wearing the unicorn costume. “Hey buddy, why the long face?” 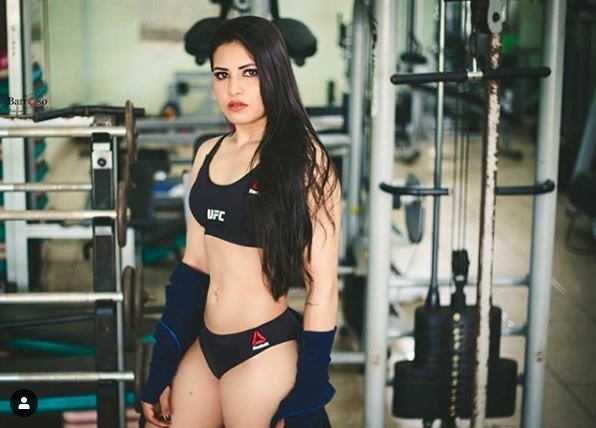 Meet Polyana Viana of Brazil. Polyana was waiting for an Uber, minding her own business, when a man tried to rob her. Oh, did I mention Polyana is a UFC fighter?

UFC star Polyana Viana left a man with horrific facial injuries after he tried to rob her with a cardboard gun.

The cowering thief even begged her to call the cops in fear of another beating after targeting the wrong person. Viana was waiting for her Uber in Rio de Janeiro when the misguided criminal demanded she hand over her phone.

After the would-be robber claimed he had a gun, Viana said she punched and kicked him before locking him in a rear-naked choke. Viana, 26, kept the man in submission while she waited for police to arrive. (H/T – MelP)

You really need to click the link to see the aftermath. I guess the next place he robs better have a ramp!

A man wanted to start 2019 off with a bang, but instead of bedding some fine, primo hoors, he was sucker punched in the face and had his money stolen.

A New Year’s Day celebration at a Myrtle Beach club took a bad turn when a man got punched in the face and robbed of the money in his hand.

About 2 a.m., police responded to a reported strong armed robbery at Derriere’s on Seaboard Street. The victim, who had a cut on his nose, told police that he was getting lap dances and was punched in the face and fell to the ground.

The victim said his brother punched him and took $6 from his hand.

So he was robbed by his own brother and the clown only got away with six dollars? Wow, you are one pathetic loser. 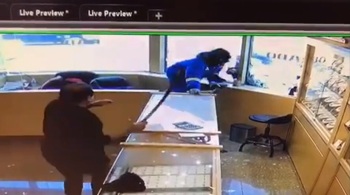 Four armed Canadian men entered an Ontario jewelry store, only to be stopped in a most magnificent fashion.

Security footage from Ashok Jewelers in Mississauga, Ont., shows four men attempting to break into the store around noon on Wednesday

After smashing a window with what appears to be a hammer, one of the robbers crawls in, only to be greeted by the store’s owner – as well as the owner’s son and brother – who charge the would-be thief with swords, swinging wildly.

The son of the store’s owner told CTV Toronto that the decision was “spur of the moment. We have to defend ourselves,” he said.

In the video, the robber dives back out of the window, trying to enter once more before he joins three others and they retreat to a nearby Dodge Durango and drive away – successfully thwarted.

The story claims the robbers were armed with handguns, which must be a misprint, because the Great White North has very restrictive gun laws.

A man entered a Subway restaurant in Norcorss, Georgia, ordered a sandwich, grabbed a handful of money from the register, and fled the scene. Then he returned, because people are stupid.

Police say 34-year-old Zachary Miller was waiting for a sandwich at the Subway location on Medlock Bridge Road when he jumped over the counter, demanded cash and opened the cash register.

He was able to obtain about $100 before fleeing. He then realized he had left the sandwich inside and went back to get it.

Wow, dude must have been raised in Flori-duh. Although in fairness, Subway does make good sammiches. They hire terrible spokesmen, but make good sandwiches.

Thursday was an interesting tour. We ended the day with seven people shot, including four people at one location. Earlier in the day, we had the extraordinary pleasure of meeting a woman who told the most incredible story of all time.

And by “incredible,” I mean absolutely, provably not credible.

The middle-aged woman comes to the district window downstairs to make a robbery report. The woman claimed, get this, she was robbed in April, and just decided to report the crime Thursday – two months after the alleged incident.

Wait, it gets better.

The woman claimed she received a check from a lawsuit for $15,000, and instead of cashing it at, say, a bank, this MENSA member took it to a check cashing place in the ‘hood. Einstein claims the check cashing place gave her FIFTEEN THOUSAND DOLLARS CASH from the check, placed it into an envelope and sent her on her merry way.

So, the woman was just walking down the street minding her own bidness, when an unknown black male approached her, pulled out a handgun, and took the $15,000. Interestingly, the alleged robber did not take the woman’s cell phone, wallet, or credit cards; just the cash.

When asked if she could provide a description of this dastardly offender, she replied, “He was a black male with a ski mask on.” Wow, that is out-f**king-standing!

The assigned detective assured this victim that we would have top men working on her case right now. Top. Men.

Joshua is a part of the Upright Citizens Brigade, so when he observed a robbery, he immediately came forward as the state’s star witness. it was not the first mistake he made that fateful morn.

Within an hour, East Alton Police said a person matching the description of the suspect was in the lobby, wanting to report the Wood River robbery. Joshua L. Franklin told police he had witnessed the robbery.

Officers arrived in the lobby and arrested him. When police searched Franklin’s home, they found clothing, money and a weapon.

Franklin, 19, pleaded guilty April 16 to a robbery at Wood River Convenient Market in August 2017, and was sentenced to four years in prison.

Two men were captured on video chasing money they stole as it blew down a Manchester street.

The men walked into the agents on Queens Walk on 1pm on Saturday 17 March 2018, where they demanded members of staff hand cash from the safe. They shoved the cash down the pockets of their trousers before fleeing the shop. But as they hurried away along Craven Street, notes started dropping out of their trousers and got caught up in the wind.

The men are seen desperately scrambling to catch the notes, which are scattered all over the street and pavement, before getting into a silver car which sped off towards Fairfield Road.

What, does England have no bags with dollar signs on them? Have these men no duffel bags? These clowns must have emigrated to England from Florida.

An armed thug learned what happens when the rubber meets the road this week, after his victims attacked him with sex toys.

An armed man who entered an adult-themed store Wednesday and demanded cash was chased off by two employees who lobbed sex toys at him.

The man can be seen pacing around San Bernardino’s Lotions and Lace before pulling a hood over his head and entering the store. He marched toward the cashier’s counter with gun drawn, but two women working the late shift refused to back down. Instead, they began yelling at the man and threw sex toys at him.

The suspect did not shrink from the attack, but I am surprised he didn’t get a bad vibe about this establishment. Lucky for him, he was not struck with any solid toys, or he would have had to limp away.

A Florida robbery suspect was found hiding from police waist-deep in a Deltona pond. There is no word whether the suspect caught – or gave – crabs while wading through the water.

The Volusia County Sheriff’s Office said deputies responded Saturday to a Family Dollar store in Deltona, where a clerk told them a man with “Loyalty” tattooed across his abdomen claimed to have a gun and demanded money.

Deputies in a sheriff’s office helicopter spotted a man walking near a pond and wading waste-deep into the water.

Sean Torres, 29, allegedly told deputies he was “just fishing” and had dropped his pole in the water. Deputies said they questioned Torres about the robbery and he responded: “The guy who did it went that way.” (H/T – TXNick)

Doesn’t this mental defective realize the only effective use of that excuse is, “He want thataway?” Damned amateurs are giving television criminals a bad name.