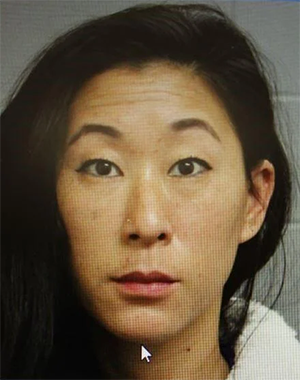 Kerry is a hard-working school teacher who simply wanted to take a quick trip to Florida with her boyfriend. Since it was only a three-day trip, Kerry left her young children alone in their home and told them to stay out of sight.

Kerry Caviasca, 36, was arrested Saturday on reckless endangerment and risk of injury charges in connection with her three-day trip to the Sunshine State in late-November. Caviasca is free on $5000 bond in advance of a January 25 Superior Court hearing.

Police began investigating Caviasca after her ex-husband reported that she had left the children, ages 9 and 11, alone in a Watertown residence. Caviasca’s former spouse provided cops with a series of incriminating texts she exchanged with her children while she was out of town.

How do you leave an eleven and a nine year old in the house alone for three days? Cripes, just let the ex-husband take them.

“Both of you stay in the basement,” wrote Caviasca, who advised the children to avoid the upstairs of the residence and “Jus staying downstairs.” When one child asked, “are we going into school, no right,” Caviasca replied, “no.”

On a Sunday evening, when one of the children asked, “what are we going to have for dinner,” Caviasca answered, “Just eat candy I’m sorry” and “what ever is downstairs.” She added, “I’ll make it up to you.”

Caviasca, cops charge, wanted the children to stay out of sight in the basement. When one of the minors asked, “Can I pee,” Caviasca replied, “Quick no lights.” After one of the children wrote, “I’m sad I put my batteries upstairs,” Caviasca suggested that the child could go upstairs “super fast,” but noted, “stay low so no one sees you.”

Not only should this awful woman be arrested – she was – but she should also lose her kids, lose her job, and lose any paternal rights from here on out. This woman is a despicable piece of detritus who should be shunned for the rest of her days.