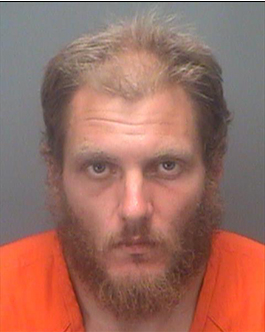 Kenneth decided to break into the Red Mesa Cantina, and while he did, he decided to clean himself… as well as his pink parts.

A trespassing suspect with “his pants opened and genitals exposed” explained to Florida police that he was “doing a chant and was cleansing himself spiritually” when he was discovered at 2:15 AM on the premises of a closed Mexican restaurant.

Don’t giggle, I clean myself spiritually once a day; mostly by sitting on the couch, scarfing potato chips, and looking at photos of Vica Kerekes.

Cops say that Kenneth Grey, 29, tripped a silent alarm after jumping a fence early Monday at the Red Mesa Cantina in St. Petersburg.

Grey was seated inside a fenced area near the outdoor bar “with his pants opened and genitals exposed.” Grey was detained and subsequently charged with loitering and prowling, a misdemeanor.

Wow, if I had a dollar for every time my genitals were exposed, I would have retired fifteen years ago.

P.S. – If you do nothing else here today, I beg of you to please read today’s Feel-Good Friday.

Renee has an ongoing feud with one Nicole Hosmer, and when Hosmer was seen walking “on Bolduc’s street,” Bolduc decided to shoot her… with a water pistol.

According to police, Renee Bolduc, 40, was inside her residence at the King of the Road mobile home park in St. Petersburg when Nicole Hosmer, 44, walked past the property.

Bolduc, cops allege, exited her home and stood on the porch, where she “took a water gun and squirted the victim in the face.” Hosmer “never went onto the defendant’s property nor did she make any aggressive statements,” according to an arrest affidavit.

Bolduc allegedly squirted Hosmer in the face because she “was upset the victim was walking on ‘her street.’” Hosmer lives a few lots away from Bolduc at the King of the Road development.

You’ll never guess what happened to Bolduc, because it’s too stupid to imagine…

Seen above, Bolduc was arrested for misdemeanor battery and booked into the county jail, from which she was released late Saturday after posting $500 bond. The water pistol was not seized by a sheriff’s deputy.

Wow, St. Petersburg must have zero crime if their police officers are arresting people for shooting someone with a water pistol. I’ll bet their juvenile jail is filled with craven ten-year old gunfighters who shoot their elementary school pals. 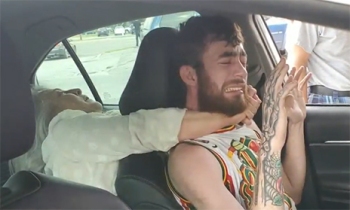 Meet Michele Stillwell, a nurse – unbelievably – who spends her free time attracting patients for her to work on. In this case, she decided to choke an Uber driver for what appears to be no apparent reason.

A female passenger who choked and took a chomp out of the neck of an Uber driver today pleaded guilty to a pair of criminal charges in connection with the bloody, unprovoked attack.

Michele Stilwell copped to battery and disorderly conduct, misdemeanors for which she was sentenced to 18 months probation. Stilwell, a licensed practical nurse, was also fined $850, directed to undergo a mental health evaluation, and ordered to have no contact with Michael Hassey, the 23-year-old victim.

As reported in criminal complaints, Stilwell attacked Hassey from behind as he drove his Toyota near Stilwell’s St. Petersburg residence in mid-April.

Hard to believe someone from Florida would do such a thing…

While the car was moving, Stilwell “reached forward and proceeded to choke the victim from behind,” according to a sheriff’s deputy. As seen above, Stilwell initially choked Hassey with two hands before wrapping an arm around his throat.

As Hassey sought to pull over the car, Stilwell “managed to crawl forward onto the center console…and bite the victim deeply on the neck drawing blood.” She then scratched Hassey across the chest, “causing a large red in color mark with traces of blood visible.”

If there was any justice, Stilwell would walk across the street and get struck by an Uber driver.

Meet Vanessa Lee Jones of St. Parkersburg, Florida. (Vanessa is the woman, not the sailor.) Vanessa sure loves her chicken; so much so that she spent the bulk of her day with breasts and thighs.

Vanessa Lee Jones was completely naked when she was seen thoroughly enjoying herself by passers-by outside a chicken shop in St Petersburg, Florida.

See, that’s why you get the chicken wings and not the chicken strips. It’s rather difficult to diddle yourself without the bones. Or so I’m told.

According to the St Petersburg police arrest paperwork, Jones, 38, showed no sign of being drunk or under the influence of drugs, and there was no evidence of mental health issues. Nevertheless, she was observed outside Popeye’s Fried Chicken at 10am entirely naked and touching herself.

Officers also claimed Vanessa was rubbing herself so hard she literally started a dumpster fire.

Meet Marshall Richardson of St. Petersburg, Flori-Duh. Richardson was just chillin’ in his homie’s crib during a party when he became upset when his peeps started smoking in front of the kids.

Cops say that Marshall Richardson, 27, was a guest at a family party Sunday afternoon at a St. Petersburg residence that was hosted by Richardson’s brother and his girlfriend, who is six months pregnant.

During the party, cops say, an argument began after Richardson “told subjects to stop smoking around the kids.” After the pregnant woman became upset and called Richardson names, Richardson got into a fight with his brother.

When the siblings were separated, the pregnant woman again called Richardson names, prompting him to allegedly punch her in the face.

Did she not understand homie don’t play that? The good news is everyone stopped smoking after Marshall dropped this chick like third grade French. 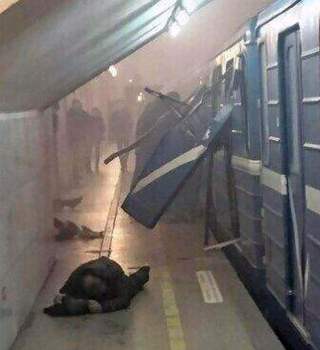 Two terrorists attacked a subway train and a metro station in St. Petersburg, Russia. At the time of this post, at least ten people are dead, and scores have been injured; including three children.

Two suspected terrorists are on the run after a nail bomb planted in a St Petersburg train ripped through the carriages.

Russian media outlets have released the CCTV picture of the bearded suspect who was wearing a long, black top and a hat blamed for detonating a bomb that was packed with shrapnel.

When will this Amish reign of terror end?

The terrifying incident took place on a train that was travelling between Sennaya Ploshchad and Sadovaya metro stations. A second explosive device disguised as a fire extinguisher was found and defused in a nearby station.

A search warrant has now been issued for two people in connection with the attack – one for planting the bomb which detonated at Sennaya Ploshchad and the other for leaving an explosive device at Ploshchad Revolutsii station.

While this is yet another despicable attack perpetrated by the Religion of Peace, it occurred inside Vladimir Putin’s domain. Putin does not suffer terrorists, so expect swift and brutal retribution in the days to come.