A 52-year old Taiwan man woke up yo see his penis was severed by a jealous girlfriend. Apparently, the girlfriend made the penis disappear. Yikes.

A JEALOUS girlfriend cut off her lover’s penis and flushed it down the toilet while he slept after suspecting him of cheating. The maimed man, identified by his last name Huang, woke up in incredible pain to find part of his manhood had been severed.

Dad-of-three Huang, 52, was “bleeding extensively” after waking from a deep sleep to the horrific discovery his member had been mutilated.

Huang said he woke up in incredible pain to find a fifth of his penis had been severed, and his girlfriend had allegedly flushed it down the toilet to stop it being reattached.

Gentlemen, if you find yourself in Taiwan, I would sincerely suggest you sleep with a codpiece.

A Taiwanese airline will be hosting a speed-dating opportunity for singles on one of their airliners. The contestants can either end up flying high, or crashing and burning. Uh, figuratively.

Taiwanese carrier EVA Air has launched a speed-dating event for singles in which 20 men and 20 women will board a plane for a three-hour ride, then land right back where they started. The full-circle trip will then be followed by a two-hour date back on land.

The airline teamed up with Mobius, a travel experience company, to organize these flights, called “Fly! Love Is In the Air!” set to take place on Christmas, New Year’s Eve and New Year’s Day.

Inside the plane, travelers won’t be able to choose their seats. Instead, they’ll be seated two-by-two by a lucky draw. Beyond talking to each other during the flight — and, yes, passengers can mix and mingle with those in other rows — the single crowd will also munch on dishes prepared by Michelin-starred chef Motokazu Nakamura, although they’ll need to keep masks on while not eating or drinking.

Thankfully, masks are not required in the bathrooms when couples join the Mile High Club.

A 56-year old Taiwanese women entered the World Gym with her cat, threatened the staff, then went on a rampage inside the business. Apparently the woman was angry about World Gym’s no-pet policy.

The 56-year-old woman, identified by her surname Chien, had repeatedly arrived at the World Gym in Tamsui in Taiwan’s New Taipei City with her orange tabby and was stripped of her membership last month.

Videos shared on social media captures Ms Chien returning to the gym on September 4 and confronting the workers over the strict “no pet” rules.

She is seen holding her cat in one arm while arguing with a female personal trainer. The woman threatens the staff and yells: “I have a gun and a hand grenade. F*** you!”

While the staff try to stop her from going further inside the gym, she starts taking off her clothes and walks around naked.

Can you imagine being that attached to your cat? I mean, I get you may not want to be separated, but is the cat going to run on the treadmill? Will it spot you while your do bench presses?

On a more serious note, I’ve been a member of Planet Fitness for a little over a year now, and I have yet to see a woman come to the gym and start removing their clothes. Not. Once.

A Father’s Day promotion by EVA Air will take fathers and their children on a flight to nowhere. The catch? You get to travel in a Hello Kitty plane! Shut up and take my money!

EVA Air wants to honor Father’s Day in the most dad way possible: By turning this plane RIGHT around.

EVA Air announced it will be honoring Father’s Day in Taiwan (celebrated on Aug. 8) by selling tickets to a flight to nowhere. The plane, decorated in Hello Kitty livery, will take off from Taipei Taoyuan Airport and will land several hours later back at the same location. All this work in an effort to get in the air again despite travel restrictions to other nations.

According to One Mile at a Time, the flight will be in the air for just under three hours. It will take off and fly toward Japan reaching a cruising altitude of 25,000 feet. It will then turn and fly over Taiwan’s eastern coastline, pass Guishan Island, the east coast of Hua, and then fly south to Eluanbi and Xiaoliuqiu, before turning around to head back.

Now while most Americans would not be interested in this, a certain 11-year old redhead princess is all for it. 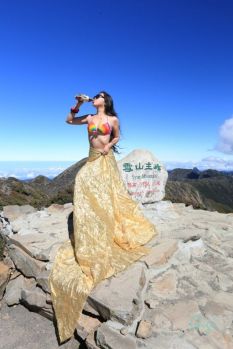 Taiwan’s “Bikini Hiker” – a woman who climbed mountains while wearing a bikini; not a woman who hikes up her bikini bottoms – met Charles Darwin this week because she climbs mountains in bikinis.

A mountaineer dubbed the ‘Bikini Hiker’ after becoming known for climbing in barely-there swimwear has frozen to death.

Gigi Wu, also known as Wu Chi-yun, set out on a solo hike on January 11 in Taiwan’s Yushan National Park before being found dead by a search and rescue party.

The 36-year-old made a distress call to a friend using her satellite phone, revealing she had stumbled more than 20 metres down a ravine. Wu said she was trapped at the bottom and unable to move due to the injuries sustained during the fall.

Look, Gigi was beautiful and probably a very nice woman, but honestly, Internet fame is not worth your life. Ever. Hike the mountains, take photos in your bikini, but for cripes’ sake, carry warm clothing in your backpack.

I sincerely hope my funeral will mirror this one…

A Taiwanese politician has been given a final farewell in the form of a street procession, with 50 bikini-clad women dancing on top of colourful jeeps.

76-year-old Tung Hsiang’s two-hour long funeral procession was organised by his son who said his father “enjoyed a buzz.” “He told us he wanted this through a dream two days before the funeral”, his brother Tung Mao-hsiung said.

I, being of unsound mind and imperfect body, respectfully request a funeral procession chock full of busty, redheaded pole dancers, shakin’ their bacon atop gas-guzzling Humvees. Make it happen.