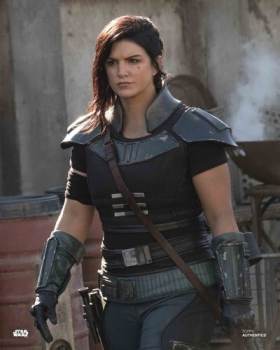 Gina Carano, a former MMA champion, model, actress, and conservative in good standing. Gina is one of the stars of The Mandalorian, a Star Wars spinoff, and she has been hounded by the Woke Twitter Mob for months because she refuses to bow to the left. Disney fired Gina yesterday over a self-prophetic social media post.

The hashtag #FireGinaCarano was trending on Twitter earlier Wednesday and just hours later, Lucasfilm did just that. The studio said late Wednesday that Gina Carano is no longer a part of the cast of the popular Disney Plus-Star Wars series The Mandalorian, after Carano shared a social media post that critics said likened the experience of Jews during the Holocaust to the current U.S. political climate.

“Gina Carano is not currently employed by Lucasfilm and there are no plans for her to be in the future,” a Lucasfilm spokesperson said in a statement. “Nevertheless, her social media posts denigrating people based on their cultural and religious identities are abhorrent and unacceptable.”

Apparently, the top trending hashtag is #CancelDisneyPlus. I sincerely hope every conservative does precisely that.

Carano fell under heavy criticism after she tweeted, then deleted, “Jews were beaten in the streets, not by Nazi soldiers but by their neighbors…. even by children.”

The actor’s post continued: “Because history is edited, most people today don’t realize that to get to the point where Nazi soldiers could easily round up thousands of Jews, the government first made their own neighbors hate them simply for being Jews. How is that any different from hating someone for their political views?”

The irony here is Disney proved Gina’s point yesterday. Eventually, the woke Twitter addicts will come for them as well. F**k Disney, f**k director Jon Favreau, and f**k The Mandalorian.