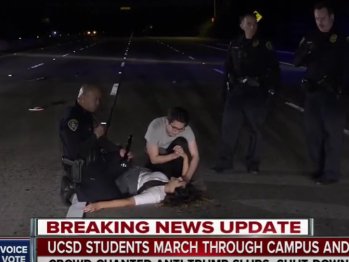 If the following story is any indication, 2018 will be filled with just as many leftist morons as 2017.

In this case, MENSA member Mariana Flores is the leftist du jour.

Mariana Flores, a sophomore at UCSD, was demonstrating against Donald Trump’s victory on a busy San Diego freeway when a vehicle hit her. The accident crushed her pelvis, fractured her leg, and caused other serious injuries, reported The Guardian campus newspaper.

Flores, in her suit filed in late November, partly blames campus officials for her injury, arguing they should have stopped the protest before it got dangerous.

In an interview with The Guardian, Gene Sullivan, Flores’s lawyer, asserted that the university planned, organized and knew the protest was happening for hours and did nothing to stop it.

So if I understand this correctly, an alleged adult had teh sadz because Hillary lost, decided to block freeway traffic with her body, was – predictably – struck by a car, and the university is to blame?

Dear Mariana, I realize you millennials think you’re special and the laws do not apply to you, but blocking a busy freeway comes with certain risks. In this case, your plan resembled your vote: you gambled and lost. I have no love for the American university community, but I sincerely hope you lose your frivolous case, and UCSD countersues you for all you’re worth.

Today is May 1st. This is the day Russian and Eastern Bloc communists watched while T-34 tanks and Katyusha rocket launchers rolled through Red Square in an ominous vision of Soviet might.

Nowadays, the event is polluted with demonstrations from millennials wearing pink pussy hats.

Hundreds of thousands of demonstrators are expected to take to the streets Monday in massive May Day events across the USA mostly protesting the policies of President Trump.

May Day — also known as International Worker’s Day — has spawned protests around the globe in past years highlighting workers’ rights. But on Monday, the impetus for the U.S. marches span from immigrants’ rights to LGBT awareness to police misconduct.

Instead of protesting about LGBT awareness – as if there is anyone on Earth who is not aware, and sick of, hearing about LBGT rights – maybe these snowflakes could stay home and read about Mariya Vasilyevna Oktyabrskaya. Who is she, you ask? She was one of the Soviet Union’s only tank drivers during WWII, risked her life for her crew on multiple occasions, and was posthumously awarded the Hero of the Soviet Union award.

Mariya did all that without whining about unequal pay or unisex bathrooms.

(Sorry about the previous version. I didn’t notice the beginning of the post was, um, missing.)

A gaggle of anti-Trump protestors decided to block the I-5 Freeway in California. They were, in a word, unsuccessful.

A group of demonstrators believed to be The University of California, San Diego students gathered near Interstate 5, a highway in California around the La Jolla area campus, according to a video posted on Nov. 9.

The students chanted “Education Not Deportation!” and “Hey, hey, ho, ho, Donald Trump has got to go!” to protest the election of Trump as president. One woman walked out into the line of traffic and moments later was struck by a car. Then, members of the crowd shouted “get the fuck off the highway!”

Well, you know what happens when special snowflakes hit your windshield; they melt.

The, in my opinion high-larious, video is posted below the fold.