Mark Zaid, the slip-and-fall lawyer for the Ukrainian whistleblower, tweeted out “the coup has started” in 2017. Wait a minute, the media told me a coup was a conspiracy theory!

Mark Zaid, one of the attorneys representing the whistleblower at the center of the Democrats’ ongoing impeachment inquiry, tweeted conspicuously in January 2017 that a “coup has started” and that “impeachment will follow ultimately.”

Then, in July 2017, Zaid remarked, “I predict @CNN will play a key role in @realDonaldTrump not finishing out his full term as president.”

I’m not a slip-and-fall lawyer, but I’m fairly certain performing a coup is illegal. I also believe it falls under treason, which could result in the death penalty for a conviction.

“The whistleblower’s lawyer gave away the game,” the Trump campaign’s communications director, Tim Murtaugh. told Fox News. “It was always the Democrats’ plan to stage a coup and impeach President Trump and all they ever needed was the right scheme. They whiffed on Mueller so now they’ve settled on the perfectly fine Ukraine phone call. This proves this was orchestrated from the beginning.” (H/T – AOSHQ)

Most of us have known this from the beginning, including the leftists. Now we need to take action against these traitorous bastards. The first move would be to wake up Lindsey Graham and get him moving toward investigations – starting with Mark Zaid – in the Senate Judiciary Committee.

“Alleged” double murderer and convicted robber and kidnapping aficianado O.J. Simpson announced he will be joining the only community more disgusting than gen pop: Twitter.

Simpson confirmed the new account to The Associated Press on Saturday, saying in a phone interview while on a Las Vegas golf course that it “will be a lot of fun.”

“I’ve got some things to straighten out,” he said. He did not elaborate before he said he had to go and ended the call.

In twenty-five years of investigative work, I have seen hundreds of criminals who swear up and down they’re innocent, despite a storage unit of evidence. They know they’re guilty, but they just don’t have the balls to say so. Simpson is worse. The man not only refuses to admit what he most likely did, but he’s announcing his entry into social media by tossing out veiled threats. S-M-R-T.

I sincerely hope this is not true, because my life force has been steadily draining since I quit Twitter. It’s the bestest!

New evidence shows [Twitter] may be inflicting harm at an even more basic level. It could be making its users, well, a bit witless. The finding by a team of Italian researchers is not necessarily that the crush of hashtags, likes and retweets destroys brain cells; that’s a question for neuroscientists.

Rather, Twitter not only fails to enhance intellectual attainment but substantially undermines it, the economists said in a working paper published by the economics and finance department at the Catholic University of the Sacred Heart in Milan.

“It’s quite detrimental,” Gian Paolo Barbetta, a professor of economic policy at the private research university and the paper’s lead author, said. “I can’t say whether something is changing in the mind, but I can say that something is definitely changing in the behavior and the performance.”

So wait a minute; all those “hot takes” from rocket surgeons like Jake Tapper, Alyssa Milano, and AOC make people dumber? The hell, you say!

Today I officially deactivated my Twitter account. After six years, it has been a long time coming.

The site has been a cesspool of anger and leftism for a long time, but my ego kept me from leaving the site. Having nearly a thousand followers is pretty impressive for a nobody like me, and I enjoyed the attention. I also thought it would be a good platform to promote the blog, but new readers never followed me here. Lately, however, the very few high points completely outweighed the low ones, and it was time for me to get the hell out of there.

For the record, I am considering abandoning all social media – with the exception of the blog – and have been for a while now. Facebook, to me, is nothing but a useless time waster, and I hated most of the people I went to high school with, so why the f**k would I want to catch up?

So if you’re one of the tens of people who enjoyed my Twitter feed, I apologize, but I’m out.

First Lady Melania Trump is recovering from kidney surgery at Walter Reed Medical Center. While she is, thankfully, recovering, the despicable people on Twitter are still cancerous.

The office of the first lady said in a statement:

“This morning, First Lady Melania Trump underwent an embolization procedure to treat a benign kidney condition. The procedure was successful and there were no complications. Mrs. Trump is at Walter Reed National Military Medical Center and will likely remain there for the duration of the week. The First Lady looks forward to a full recovery so she can continue her work on behalf of children everywhere.”

The hatred began almost immediately on Twitter. Multiple verified accounts made crass jokes about the Melania and blamed her condition on President Trump.

I refuse to post the disgusting comments here, but they’re vile. Hate on the president if that makes you feel better, but Melania has been a gracious, honorable, and classy First Lady. 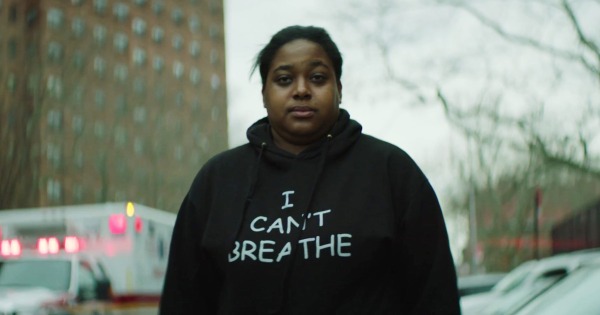 Erica Garner, whose father died during a police confrontation, has died.

Erica Garner – an activist for social justice and the eldest daughter of the man who died from a police choke hold in New York in 2014 — died on Saturday morning days after suffering a heart attack, her mother Esaw Snipes said.

Garner, 27, suffered from the effects of an enlarged heart after giving birth to her son three months ago, Snipes said. Garner went into cardiac arrest earlier in the week and suffered major brain damage from a lack of oxygen.

I never celebrate someone’s passing, no matter the person’s character. That said, Erica’s mother is now running the Twitter account, and posted this despicable tweet after Erica’s death:

For a group whose mission is combating racism, they certainly seem extraordinarily racist.

Regular readers know I am a big fan of The Walking Dead. I have seen every episode – many more than once – and consider it one of the best shows on television. For the most part, its actors keep to themselves, and don’t make asses of themselves on social media.

While many in Hollywood and elsewhere expressed outrage at Trump’s words on Tuesday, Jeffrey Dean Morgan was much more blunt in calling out the president for his resurrected insistence that “there is blame on both sides.” The actor made a particular point of spotlighting the effect Trump’s words and stance will have on children trying to make sense of their president’s POV: 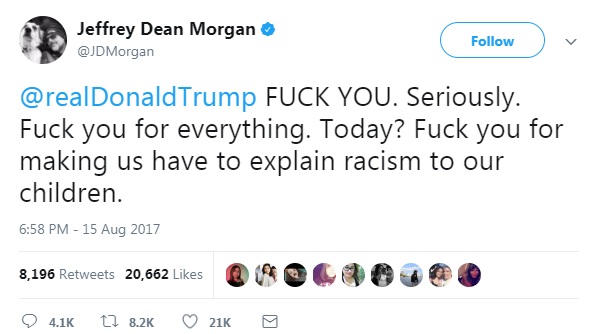 Now call me a cockeyed optimist, but I thought all parents explain racism to their children when they are old enough to understand the concept. Little did I know parents are not allowed to broach that subject until a politician forces our hand.

Look Jeff – may I call you Jeff or will Jackass do? – throwing out F-bombs on Twitter may earn you street cred with your leftist buddies, but half the country sees you for what you are; an opportunist looking to ingratiate himself with the Antifa crowd.

Your infantile tantrum is nothing special or unique, and there is no need for me to continue wasting my time watching your series. The Walking Dead will now find a comfortable place alongside the NFL, You’re The Worst, and Agents of S.H.I.E.L.D. as programs I will no longer watch.

The Meet the Press host live tweeted the spectacle, at times sending tweets that indicated he didn’t believe the president was telling the truth. But Todd found Trump’s constant delegitimization and labeling the press “fake news” the most dangerous aspect.

As I replied on Twitter, Chuck Todd lives in a world where the MSM has First Amendment rights, but President Trump does not. Ironically, he and his ilk delegitimized themselves. 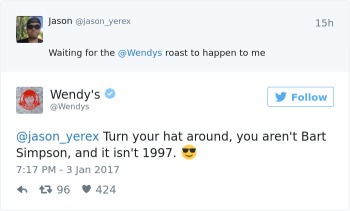 While I have been mostly ignoring the Twitter cesspool – with the exception of trolling liberals after the inauguration – many of my friends have been urging me to follow Wendy’s timeline. Why would I follow the Twitter feed of a fast food restaurant?

Well, because the brilliant woman who runs it spits hot fire.

Wendy’s fast food chain might be named after a sweet little girl, but don’t be fooled by that seemingly innocent exterior. Beneath that sign lurks a world of sass, as Twitter users everywhere have recently been discovering. The fast food restaurant is well known for its hamburgers and chicken sandwiches, but they’ve also started to serve up double helpings of shut the hell up to anybody brave enough to take them on via Twitter. Check out this funny list of tweets compiled by Bored Panda to see what we mean. The moral of this story? Don’t mess with Wendy’s!

Check out the examples of Amy Brown’s genius at the link. It will definitely brighten your Monday.

Over the past few weeks Twitter has been lowering the boom on conservative pundits for speaking their collective minds.

But it is a perceived problem which in itself inhibits speech. Be careful what you say, or you may end up in Twitter purgatory, suspended and pushed off the debate in the public square for reasons unknown.

The silencing occurred immediately after feminist Anita Sarkeesian was appointed to Twitter’s “Trust and Safety Council” – an organization which offers liberal Twitter users safe spaces to protect them from differing opinions.

Initially, major conservative pundits had their “Verified” check marks removed for no reason. Then the retribution became more overt.

Outspoken conservative blogger Robert Stacy McCain was one of the first victims. His account was suspended, then banned, and after McCain filed an appeal, Twitter banned him permanently. As a result of these draconian tactics, many top conservatives – including actor Adam Baldwin, Larry Correira, and Ace from Ace of Spades HQ – have quit Twitter altogether.

While I am by no means a top conservative voice on Twitter – or anywhere, for that matter – I am following suit. I am not deleting my Twitter account, but it will only be used for posting links to The O.K. Corral and book news. I will not be using Twitter for any other reason. Why spend time on a site whose proprietors despise you?

So, if you’re one of my 911 – heh, ironic – followers, I apologize. The blog is still open for business, and will be for a very long time. Lord knows you can read my idiotic opinions here, 24/7.